Identity Magazine
Home Trending The “Give Birth to a Boy” Ad; Sexism or Egyptians Being Too...
Facebook
Twitter
Google+ 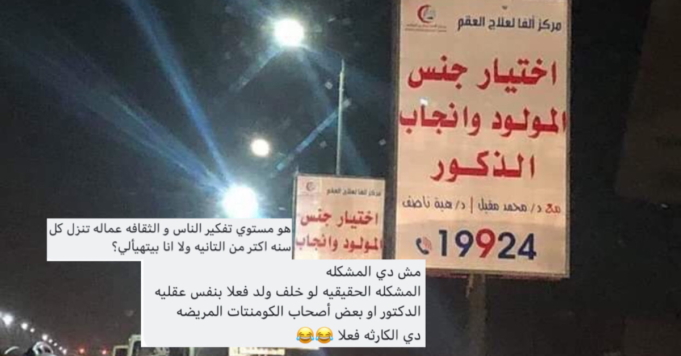 On Friday, October 18th, a simple Facebook post went viral to spark the usual controversies we got so used to seeing on our timelines. The post had a picture taken of a small billboard ad located on the 6th of October bridge. It said: “Choose the sex of the baby and have males.”

As you can see in the picture, the ad belongs to Alfa Infertility Center.

Needless to say, not long after the post was published, all hell broke loose on social media. With people making angry comments about how we’re nearing the end of 2019 and still promoting the ancient idea of female infanticide.

You see, back in the day – you could even still see it in old black and white movies -; people in Egypt, especially the upper side, had a major problem with the idea of having girls.

And even though it’s the type of chromosome that the man’s sperm carries that determines the sex of the baby, not the woman’s ovaries, many men still choose to blame the women for ending up with females and not males, whenever it’s the case. As if their uteri are responsible for making the choice…

However, we’re in 2019 now and luckily people are more aware. Therefore this is no longer an issue in most areas in Egypt. At least not as bad as it was before.

That being said, it still doesn’t mean that the idea of sexism and male superiority is dead in Egypt. It clearly isn’t for so many reasons already.

But let’s take a look at this recent incident; was that the intention? Did they really mean to go back to the old ages of ‘female infanticide‘ because that’s still the norm? Or was it just an ordinary ad that was badly phrased?

The way we see it is that first of all the whole ‘Choosing the baby’s gender‘ has been going on for ages. And it even began taking place in a couple of foreign countries starting the year 1978.

Of course, the concept itself faced some disagreements. Here in Egypt, it’s frowned upon, especially since people look at it from a religious perspective.

However, this ad was not just promoting the idea of choosing the baby’s gender. The way it was phrased made it sound like “Come on, sign up now to avoid having girls and live happily!”

We’re honestly starting to think that promoting the idea of ‘male superiority‘ is no longer intentional. It’s just becoming – if it isn’t already – the norm. To the point that it’s apparently done unconsciously. It’s just the way it is.

A big infertility center couldn’t have approved this ad and put it out by mistake. The phrasing was horrible but they’re very much aware that they’re promoting what people would initially visit their center for. Not more, not less…

And here lies the dilemma of ‘is it their fault that they’re promoting the idea of “More males, less females” or is the whole thing just based on supply and demand – which drives it back to people’s choice?

You tell us; is the ad and its phrasing just messed up or are people really overreacting because they’re becoming too sensitive?