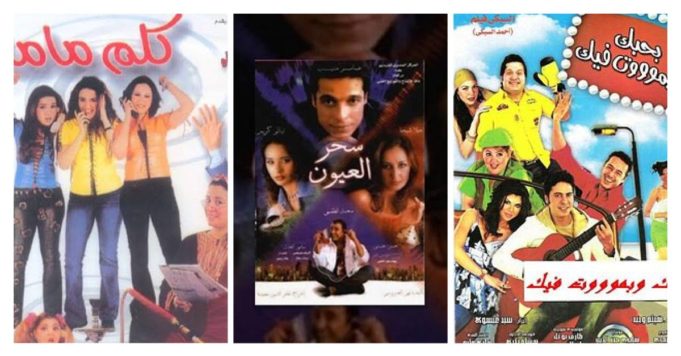 Egyptian cinema has numerous picturesque, intellectual artistic movies that help us contemplate the meaning of life, art, and society. But when it’s the weekend or when you’re finally home after a long day, you don’t need those kinds of movies.

You’re probably looking for something light, fun and dramatic. Or even a super-hyped cliche action movie. A movie that doesn’t take a lot of thinking. So, we’ve listed some of the really bad, but really good movies that best suit this purpose!

Let’s start by saying that the year 2000 was the beginning of the era of chick -flick cinema. Despite the fact that Mona Zaki, Hala Shiha and Karim Abdel Aziz’s movie is a spitting image of Julia Robert’s “My Best Friend’s Wedding”, it’s still really good!

2002’s Sehr El Oyoon was so bad, it’s actually so good. With Amer Mounib, Nelly Karim and Hala Shiha in the main roles, it got everyone’s attention. Yes, despite how weird the plot was!

A production of 2005, but the movie remains relevant today. Although the movie is so very bad, it’s somehow good. Like really, a mischievous bunch at college who all have a crush on the same girl. Classic, right?

When this movie came out, it was groundbreaking. The all-ladies movie focuses on the hardships of the girl-gang; between controlling parents, graduating college and love life. Super hilarious!

Don’t get us wrong, we love Tamer Hosny. However, this movie, in particular, wasn’t his strongest suit. Nevertheless, it was a great deal back then and we do still enjoy it today.

A few years after, commercial cinema evolved and started to employ some good old drama. “Keset El Hay El Shaaby” tells the story of the long-lost child of a famous folklore dancer. Talk about good-cinema!

2006 witnessed some major mafia dramas as well. Starring Mohamed Ragab, Yasmine Abdel Aziz, and Nicole Saba; 1/3 Dastet Ashrar was bound to be successful. And until this very day, social media is full of memes about it!

Moving on to 2007, Egyptian cinema started to tackle issues like abusive marriages and the tourism crisis. So, We’ll give that to the half musical-half horror Khaleeg Naema!

We don’t mean those movies are bad movies per se, but they’re mainly commercial with somewhat poor plots. But despite that, we love them and still enjoy them!