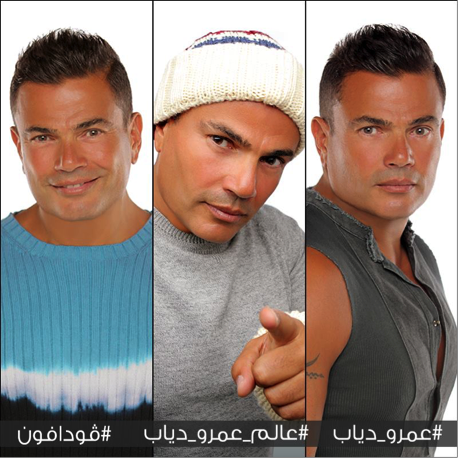 It seems like Ramadan is the official nostalgia month, just watch the TV ads, or go give Cairo festival city a visit to live their 90s Ramadan theme. But Ramadan is just a mere month, let’s look at the bigger picture, it seems that nostalgia turned into a lifestyle by its own, a fashion trend. You will find people wearing t-shirts with things like I was born in the 80s or stuff from 90s TV shows like mazinger. Even the notebooks, there are notebooks with old Amr Diab album covers on them!!

Companies started to realize this trend so we started to see TV adverts that play on this feeling and this life style. With a closer look we see that these companies helped in expanding this trend. Even Amr Diab realized this and he started using the nostalgia tone with his fans, hey guys, do you remember the ‘’Tamli maak’’ Pullover?? Or Amr’s goatee in the early 2000s?? And to be honest this trend isn’t in Egypt only, in the USA you will find record companies releasing new albums by Nirvana or Michael Jackson to gain some quick cash, now it’s easier to remake a film than making any new stuff. Back to Egypt, so even if this whole thing was started by the TV ads, why did it work?? If the trend is the other way around and it’s the people who started this trend and marketing companies used this as an advantage then we will face the same question, why?!

Why am I asking this question?? Because most of us are under 25 and even if you are 30, why are we acting like a bunch of 70 years old?? In other words why are we stuck in the past?? People talk about Egypt’s last Africa’s cup of nations win as if it was a hundred years ago not 5 years ago.

The reality is that the reality itself is grim. The TV shows are grim and uninspired, the revolution didn’t go the way that people were expecting and people aren’t that inspired. Most young people live in this depressing, uninspiring cycle that never ends. You eat, study, go to high school, go to university, graduate, find a job, work like a government mule to save money to get married, have kids, spend on your kids, get them to school and so on till you die, that’s one big depressing cycle we have here. So what to do when everything around you is so grim, so depressing?? Go back to the days when you didn’t care about anything at all and try to find something that might make you feel alive, that deep down you have something to feel happy about. Our generation is so lost and isolated that they want anything to give them a sense of safety and an identity to stick to even if we are basically still living this life.

So, I guess the main problem is that this generation isn’t that inspired to live in the present and stop living in the past. Reality is that all of us aren’t that old to have this huge nostalgia feeling and that’s the main problem, we aren’t living our lives the right way, I don’t think that most of us are living at all. This might sound unrealistic and corny but we really should start living. We should look for an inspiration and yes it isn’t that easy in Egypt but it isn’t an impossible task. There are figures who might inspire you, like for example ‘’Cairo runners’’ who inspired thousands of Egyptians to wake up every Friday morning to run. Even if you don’t find someone in Egypt to inspire you, look at the women’s world cup in Canada and how athletes like Alex Morgan managed to turn women’s football or football in the USA into a phenomena and a growing sport. Yes, the reality is grim, yes, life is hard, but we have to find a way to change this, even if we only change ourselves, who knows, you might be the inspiration that you and your friends are looking for. Yes, the past was really great but this doesn’t mean that we shouldn’t fight for our lives and futures, we aren’t old, we are still young and we have a long way to go so don’t waste your lives and start creating new memories.

What is the point of being alive if you don’t at least try to do something remarkable?’