There may come a time, probably during high school or college, when you will feel blessed for being in a mixed educational system. You cannot count the amount of embarrassment, fuss and even heartbreaks it has saved you. Let’s find out the perks of being a girl in a mixed school:

You will be acting easily around the opposite sex, because you’re simply used to being mates since kindergarten. You will not feel uneasy or go pink each time you need to speak, or ask questions and all that jazz.

2) You will have a mature perspective regarding relationships.

A simple friendly joke or a call from a guy won’t be perceived as if he setting his cap for you. You’ve been through it all, the plots or gestures that could deliver a double message for some other girls. You’re not naïve, gullible or easily fooled.

Of course you want to look stunning every time you go out, which shouldn’t be a problem except for one small issue: You will have to go to school every day at six am for at least fourteen years! You can’t wake up each day and expect to have time to fuss with your hair and makeup; it’s literally impossible. That’s not a perk I know, but here is it anyway: You will be comfortable knowing you look terrible with your hair all tumbled in the presence of guys around you. You freed yourself of your daily nightmare; you won’t have to look good if it’s killing you.

Your girlfriends won’t have the guts to break the harsh news to you when you fight or break up with your boyfriend. Only your guy friend will toss the cold water in your face; he is a guy after all. Only mixed schools can give you the chance of having a strong bond with a guy who is not related to you.

5) You will know all about soccer 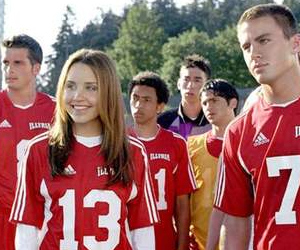 Starting with how to play it and what the Champion League is, you will definitely be bringing the house down when Barcelona are playing Real Madrid or when Messi and Cristiano Ronaldo are Ballon d’Or nominees.

6)You have the green light to pass your curfew

Going out with guy friends you literally grew up with will give you the privilege of coming home later than your usual curfew. Your parents will be less worried in their presence.

7) Your father won’t have the talk with every guy in your life.

Your parents will be used to the guys in your life, either having them over at your place, or going to theirs.

This is where the rubber meets the road, and the school years will pay off. The nervousness of girls from single sex schools will be in evidence when it comes to awkward guy moments. Having thick skin while those girls may be blushing, you will be raising an eyebrow and rolling your eyes thinking they are just “Boys”. Chill!!