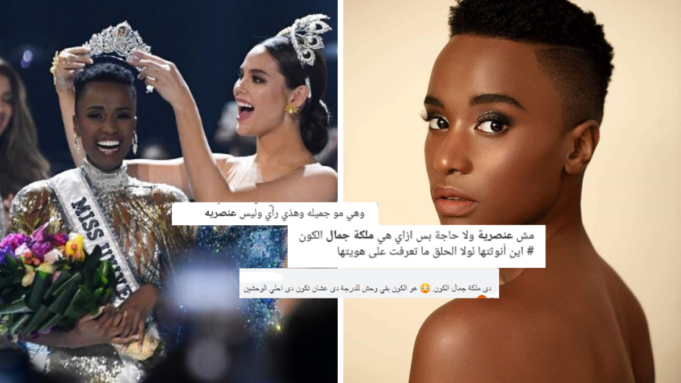 When Zozibini Tunzi was crowned Miss Universe 2019, reactions certainly varied. Many people were happy that she’d won, but others were a little bit iffy about the whole ordeal. Okay, not “a little bit”, just look below.

Okay, so here’s the thing. It wasn’t the only one of its kind.

See, it seems like a lot of people saw this Miss Universe as undeserving and when cornered to answer just why they thought so, they cited reasons like she’s not “classically beautiful” and that she has short hair, which is inappropriate for some reason.

Some even said the only reason Tunzi was crowned was her skin-tone, that she won as a “sympathy vote”.

We’ll spare you all the beating around the bush here.

The one evident reason people aren’t happy with the new Miss Universe is the colorist bias against dark-skin, which we’re no strangers to. We as Egyptians have a problem with colorism, which we’re in complete denial about.

Spreading this horrifying rhetoric disguised as “opinions” harms our society and ourselves, especially the huge portion of us with dark skin, who are already dealing with an overwhelming amount of bullying.

This point of view needs to be changed, naturally, and before you tell us we’re just trying to make things difficult, we’re not saying change comes easily or all at once.

We can start small by re-evaluating our points of view to see why exactly we think “dark skin = bad” and not pointing fingers when we’re called out for colorist behavior.

Take it from the woman herself. Talking about the colorism she’d faced growing up, Miss Universe 2019 had said “I think that it is time that that stops today”.