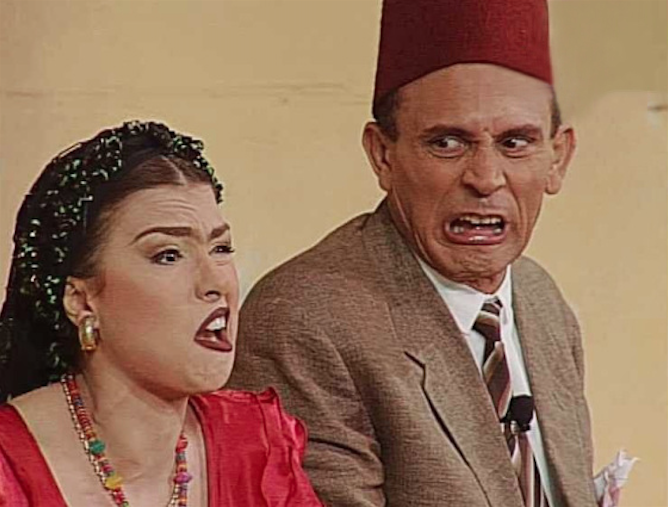 The tale goes that a husband went back home, and found his wife busily working in the kitchen on a new dessert for her guests. She was so focused on the task that she didn’t spare him a welcome back kiss; he said “bas bosa!” which means “just a kiss!”. When their guests tasted the new dessert, they liked it and asked about its name. So the husband smiled and said “Basbosa” which turned into “Basbousa”.

Remember Shaggar El Dor? That witty woman who ruled Egypt for 80 days? To accept Ezz El Din Aybak’s marriage proposal, she had two conditions. He had to divorce his first wife, and disown his son, Nour El Din Ali. He said yes, later on Shaggar El Dor got bored of him and killed him! The first wife plotted to have Shaggar El Dor killed, and her son took over the throne. She was poor, and so to celebrate the event, she mixed all the ingredients she had at home; flour, sugar, nuts… and distributed them to her neighbours. The news spread that Ali’s mother was giving out a new dessert, so it was named after her. Om Ali.

This one emerged from Greece where it’s called Loukoumades. Loukoumades are little bite-sized fluffy sweet honey puffs (the Greek version of donuts). In in the thirteenth century BC, this dessert arrived to Baghdad and here is where the story splits. A scenario suggested that juries over there liked it, so that’s the secret behind the naming. Other scenario says that Arabs couldn’t pronounce the name correctly, so over the years it got transformed into Loukemet-El-Kady, and since it made more sense we kept that way. We always like to leave our touch!

Saray means a fancy palace, and at the Levant (In its narrowest sense, it is equivalent to the historical region of Syria) the people who lived in these palaces loved to do everything differently, especially when it came to food. Over there, they wouldn’t just bake bread, they would add sugar, caramel, cream and nuts to it. So when outsiders got a bite of it, they were awed by the palace’s bread, and the name stuck… 3esh El Saraya.

The story goes back to 1260, when El-Zaher Baybars returned to Egypt after his victory over the Mongols, a lavish gala was held. There was a girl, called Zeinab, who was so gifted when it came to cooking, and her skills blew all the whistles when it came to dessert. On that day she cooked a new dessert, and Baybars was at awe from its taste, so he complimented her saying “Teslam Sawabe3k” instead of “Teslam Eidk” and everyone started to laugh, and the joke gave the name to the dessert. Sawabe3 Zeinab.

We can now eat these mouth-watering desserts with good conscious.