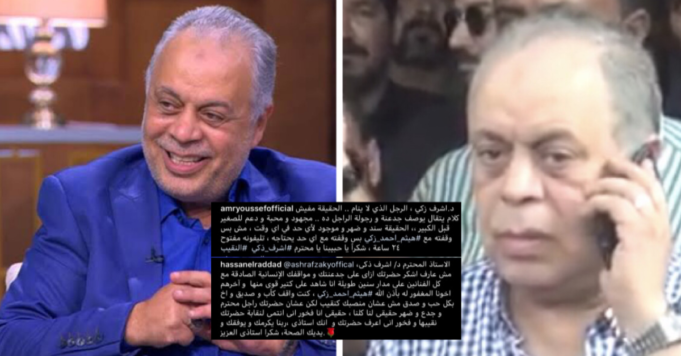 If you scroll down your timelines right now, you’ll probably find a number of posts from celebrities and non celebrities appreciating and paying respect to Egyptian actor Ashraf Zaki, who’s also the current head of the Egyptian Actors’ Syndicate.

This came following the saddening and unfortunate death of Egyptian actor Haytham Ahmed Zaki on the early hours of Thursday, November 7.

Where Ashraf Zaki did not only show us what it means to be a man of action – who knows how to do his job perfectly well, but he also led by example and taught many how to care about human relationships and stand together in the tough times before the good.

We can’t help but acknowledge his noble act of handling all the paperwork and being the one who ended up receiving the body from the morgue; instead of the deceased’s relatives who were out of town/country.

Other than the fact that he was the first one at the funeral, Zaki was also first in line to receive condolences for the loss of Haytham.

Many celebrities and non celebrities were incredibly touched by Zaki’s involvement, but most importantly by how it’s not just about his duties as their representative as much as it’s about how much he cared to be there.

This, however, wasn’t the only situation where Zaki’s nobility showed. So many people have already attested to the amount of times he stood by them in the toughest most serious situations.

Like Emy Talaat Zakaria after her father’s death, as well as Egyptian actress Merihan Hussein in her legal troubles. And the fact that he offers all the support whenever any of them is sick or in need; according to Egyptian actress Wafaa Amer and many others – even if that person is not a syndicate member -.

So in conclusion, Ashraf Zaki is an example of how everyone should act towards the responsibility they have and how human relationships and being there for each other should be the number one priority.