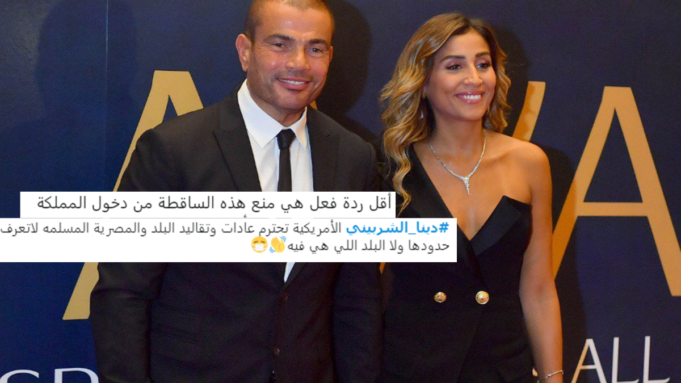 Controversy follows Dina El-Sherbiny like a clingy pet follows its owner around the house. So it’s probably no surprise that she made headlines again for wearing a dress to a Saudi formal event.

Though we’ve had our share of controversial dresses this past year, we can safely say nothing about El-Sherbiny’s dress warranted the cyber-stoning she got.

We can argue about culture and values and traditions all day, but we’ll get nowhere here. This once we can clearly see who’s in the wrong and it’s not El-Sherbiny. It’s Saudi Arabia.

Why? Well, hasn’t the country been calling for progression for a couple of years now?

Before anyone says we’re just hopefully bluffing something into existence, know this:

Saudi Arabia dropped its traditional dress code for foreign women, citing a list of what they’re not allowed to wear in public. Dresses aren’t on it.

Saudi Arabia dropping the dress code wasn’t the first step they’d taken to progression. Among other things, they’ve finally allowed women to drive and join professions they weren’t allowed to in the past.

They also allowed cinemas and other forms of public entertainment. The most striking change is that the country has also allowed unmarried foreign tourists to share hotel rooms.

Reading this, you might think that the good old days of an admittedly rigidly traditional Saudi Arabia had gone past. Re-reading the tweets against El-Sherbiny’s dress, though, will make you think otherwise.

It’s clear that there’s a disconnection happening because one important thing is missing. Progression. It might sound ironic, considering the last paragraph, but a progression where people get to pick and choose what’s allowed and what’s not isn’t “progression” at all.

We’ll let you pick the word for it. Whatever you may call it, though, it’s stunting all the steps Saudi Arabia had already taken.

For rigid societies, progression will take time and it can come in gradual waves. We understand the concerns, but we see no improvement so far. Will it take them a century to catch up?

Although rules are changing, you won’t see all Saudi women driving on a regular basis, according to eye-witness accounts, though you’ll see loads of people saying that that privilege should be revoked.

When it comes to the country’s dress code, Crown Prince Mohammed bin Salman himself said during a CBS interview that abayas weren’t mandatory in Islam, but people still shun those bold abaya-less Saudi women in public spaces.

No one is forcing anyone to do what others do if they’re not comfortable with it. That’s a two-way street. No one can call for a “move towards the future” and then backtrack when they realize it’s actually happening.

Although the government is not showing any signs of backtracking, we don’t see a sincere push towards this on a local level. Saudi Arabia and its citizens keep pushing towards change and progress, but the reactions and backlash don’t portray that.

Not to harp on the abayas and the dress code, but a strong example can be seen there. Recently a Canadian expat to the country was denied entry to a mall because she wasn’t wearing a abaya even though it’s not a requirement anymore.

Until Saudi Arabia redefines its progression and actually follows up on its enactment, we’ll likely hear more stories and extreme reactions about women and their outfits. Needless to say, that’s not a thing anyone wants in their new millennium.

Sometimes, a dress is only part of your wardrobe. Other times, it can start a serious conversation about a country’s values.