Identity Magazine
Home Trending The Story of Shikabala’s Family Photo: How did it come down to...
Facebook
Twitter
Google+ 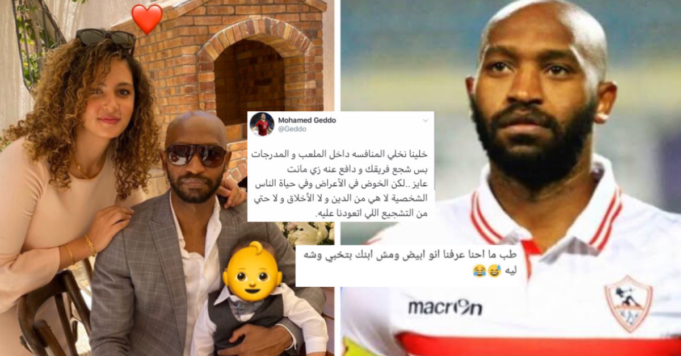 On the first day of Eid, just like any regular human being would, Zamalek FC player Mahmoud Shikabala posted an Instagram story that featured him, his wife and his baby boy – wishing everyone a happy and blessed Eid.

Due to the cyber-bullying such celebrities are often subjected to, Shikabala – like many others before him – chose to insert an emoji on his child’s face to avoid any unnecessary comments directed at the toddler. He just didn’t want him under the spotlights.

However, that didn’t stop some people from insulting the footballer and his family anyway on various social media platforms. And it wasn’t just about making fun of him for football rivalry reasons or anything else; some comments actually crossed the line, doubting the child’s lineage and descent just because he’s ‘white‘ like his mother.

Can you believe it?

The thing is, this wasn’t at all the first time Shikabala’s son gets subjected to such verbal abuse from so-called football fans online. Since back when the player first posted a photo of his newborn, comments and questions about his race were all over the internet, again, because he didn’t have the exact same skin tone as his father, and took his mother’s, instead.

It’s honestly just sad to think that people have run out of ways and words to bully someone, so they resort to questioning whether or not a football player is really the father of his own child.

It’s also totally beyond us how some social media users never ask themselves how an entire family could be negatively affected by this.

If and when Shikabala and his wife take notice of such comments, how do you think they will feel? And for what?

It’s not even the matter of Al-Ahly vs Al-Zamalek anymore, it’s about human beings thinking it’s normal to make hurtful comments and on top of all, having the audacity to think they have an opinion on race and God’s creation.

Thankfully, Shikabala’s fellow footballers and other decent people came to his defense on the internet, because nothing will ever give anyone the right to bully others – let alone a child – online for their race, looks, or anything else for the matter.