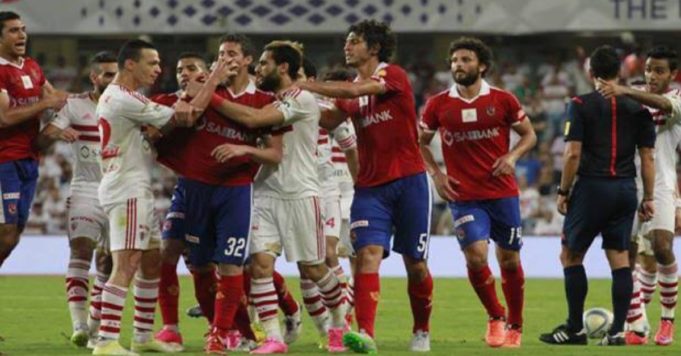 To all football fanatics out there, the Egyptian derby is upon us once again! The Egyptian league has been on fire this season and we’re nearing the moment of truth: “Who’s gonna win the title?”

Tonight, March 31st, almost everyone will be tuning in for Al Ahly vs Al Zamalek game at 7:00 PM!

If Al Zamalek wins, they will still be on top of the Egyptian league and it will really increase their chances of securing the title.

However, if Al Ahly does win, they will top the Egyptian league table and leapfrog Al Zamalek by one point. And although Al Zamalek statistically had a better season, today’s game might hand the title to Al Ahly and settle the race.

In preparations for the always entertaining Egyptian derby, from celebrations to the usual clashes, here are the top 7 moments in Al Ahly vs Al Zamalek games:

This was one of the best finals. Everybody, including Al Ahly supporters, were praising the outstanding performance of Al Zamalek’s goalkeeper Mahmoud Genish!

This wasn’t the first time Al Ahly player does this. However, as you can see in the video, it all broke down to a huge fight between the two sides! Sobhy’s “ball incident” is considered a very disrespectful gesture in the face of the opponent.

This match is considered the best and most entertaining Arab Clasico ever! There were top performances everywhere and both sides’ supporters did not want it to end, regardless of the final result!

It wouldn’t be an Ahly vs Zamalek match if those two don’t foul one another, HARD! And again, this wasn’t the first time a clash like this one occurs between Al Ahly’s Saad Samir and Al Zamalek’s Bassem Morsy! (Also, ouch!)

Here, Al Ahly’s side scored a goal while one of Al Zamalek’s players was on the ground. Which was supposed to be a foul, according to their former coach Hossam Hassan. And of course, he expressed his disapproval and anger by screaming at Al Ahly’s coach Manuel Jose’s face! (Not cool captain, not cool!)

Do we even need to talk about this one? Every Ahly supporter knows the history and glory behind this particular match. It’s still remembered and celebrated almost every year!

Al Zamalek supporters are definitely aware of how emotional that one was! At this time in the 2018 season, Al Zamalek were not in the best form. To say the least. They were sort of going on a losing streak and this very crucial game against their arch rivals Al Ahly, brought back the life and confidence to the players and supporters!

So to all our Ahly and Zamalek supporters out there, hope you liked this trip down memory lane. Have a great time watching tonight, and may the best team win! Also, don’t hesitate to comment with your top unforgettable moments in the Arab Clasico!