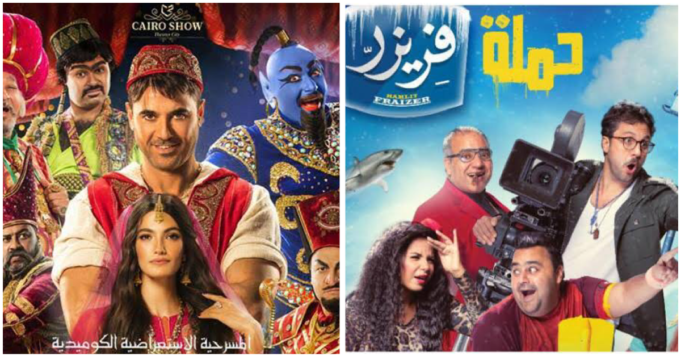 For the past few years, the Egyptian film industry has been producing many comedies starring the new talents on the scene; from Bayoumi Fouad to Akram Hosny and even the “Masrah Masr” crew.

We can’t exactly say the movies released have been bad or anything. It’s just that there’s a pattern we’ve noticed that we need to talk about.

And it’s the trend of modern Egyptian movies, specifically comedies, being based on internet memes. Actually, thinking about it, it’s not only the movies – but even theatre.

For example, we won’t be exaggerating when we say that over 50% of the dialogue of the Egyptian “Aladdin” play starring Ahmed Ezz, Tara Emad, Mohamed Tharwat and Hesham Ismail is based on internet jokes. It’s actually one of the reasons why it’s not funny.

Going back to the main point, Egyptian comedies have kind of lost their original sense of humor. Our early 2000s comedies were at least original. This is why hardly any of them didn’t end up being a huge success. They’re widely popular for audiences of all ages until now.

When you take a look at the difference between the comedies now and then; you’ll realize how strong the influence of the internet is. It’s also the main reason why almost all of the scripts are so uncreative.

It’s true that the Egyptian cinema industry is actually evolving in terms of exploring new genres and focusing on making big productions. But we can’t deny that we’re deeply disappointed at the lack of creativity and talent when writing comedy scripts.

We do understand that the Egyptian internet and the fact that memes have become the core of so many real-life conversations right now should inevitably impact the Egyptian comedies of today.

But that never means that writers should only rely on those memes and depend on the audience laughing just for the sense of familiarity and the fact that they’re connected to the meme culture.

At this point, and after noticing this said pattern, we’re really hoping for a better future for the Egyptian comedies. Because the genre will be completely demolished if filmmakers keep following this trend.

What about you? Do you feel the same about the meme culture and its very noticeable effect on Egyptian comedies?