Identity Magazine
Home Trending The U-23 Egyptian Olympic Team Did Something Great; But People Are Too...
Facebook
Twitter
Google+ 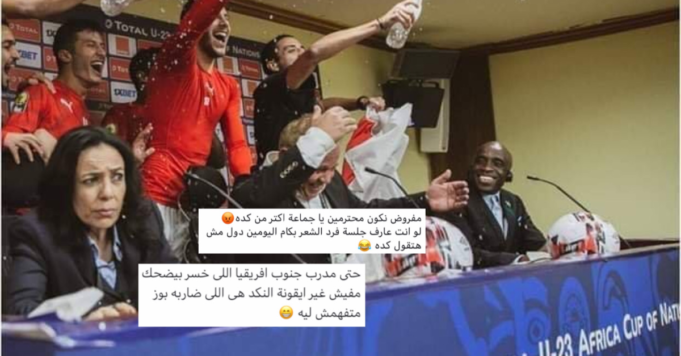 On November 19, the U-23 Egyptian Olympic Team led by now-captain Ramadan Sobhi, defeated South Africa in a stunning 3-0 win – which qualified them to the final against Ivory Coast as part of the U-23 Africa Cup of Nations.

However, instead of celebrating the achievements of these brave young men who are also taking Egypt to the 2020 Tokyo Summer Olympics, social media users decided to exercise sexism and offensive ignorance.

As the players broke into the press conference that followed the game to celebrate and mess with their coach Shawki Gharib, they spilled water all over the area. Which led Inas Mazhar, the media coordinator/officer of both the Egyptian National Team and the Confederation of African Football, to cover her face.

Because who wouldn’t when water is being spilled on them?

But why would people leave her alone and let this completely normal reaction slide when they can turn the whole thing into a mocking session directed at women?

From those who kept making silly comments about her being scared of ruining her hair to those who awfully pointed out that we’ll see another side of her if that makeup is ruined; people were all kinds of cyberbullies!

Not to mention the fact that original post was meant to ‘showcase‘ the difference between men and women when it comes to happy moments. As they kept laughing about how women always bring the mood down because ‘it’s in their nature‘.

Also, a lot of the men who pretend to be football fanatics and always say that women should stick to the kitchen didn’t even know who Mazhar was.

Well, let us tell you that the woman you’re making fun of has been working and excelling in the field you so passionately love for 20 years now. Because on top of her many prestigious titles, Mazhar is also the translator they all resort to when it comes to international games.

She is also a former member of the FIFA Media Committee, as well as the head of the sports section in Al-Ahram Weekly.

Honestly, what’s absolutely appalling is the fact that the people who – so deliberately – continue to disrespect women often choose to ignore how these women are way more successful than they are. That’s of course in addition to the other women who just like to put their own gender down.

Because acknowledging that women are actually strong, independent and incredibly clever makes sexist haters feel ashamed. Instead, they choose to focus on the women’s hair and makeup. So if anything; it’s shameful to those ignorants, not the women subjects.

We know that calling for the stereotyping sexism and pointless mockery – from both, men and women – to end is just the first step. Tell us guys, how do you feel about this?