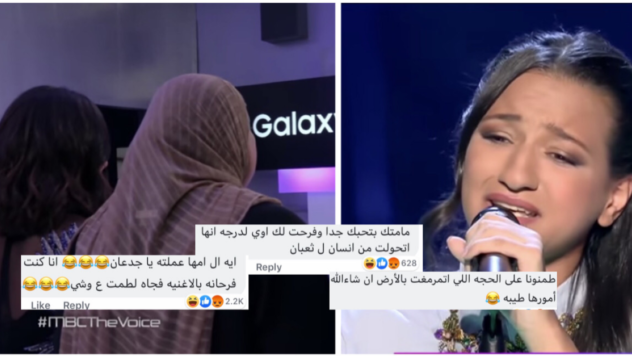 But the feedback she got after the episode was completely the opposite of what she expected.

El-Morshedy performed Amal Maher’s “Ya 3einy 3aleiky Ya Teeeba” beautifully; which did not only make both Ahlam and Alama turn their chairs and fight for her, but also made Ahlam tear up – big time!

Unfortunately, the audience’s attention – and by audience we mean social media users – was not caught by the girl’s performance. In fact, they were too busy making fun of the way her mother celebrated her success.

Most of the Facebook and Twitter comments on the episode were full of people mocking El-Morshedy’s mother because she fell to the floor in shock right after the chairs turned.

While the reaction might have seemed too much, it was still understandable. Imagine your own daughter showcasing her talent in front of, not only a full audience on stage, but also professional and famous singers. Wouldn’t you have done the same? Or even more?

Even if your reactions would’ve been different or more subtle, why do we have to rain on people’s parade just because they’re celebrating differently?

Instead of being filled with happiness and pride following the airing of her episode, El-Morshedy was crushed because her attention was immediately turned towards the awful comments mocking her mother.

To the point that she posted a live video on her Facebook page crying about it. She expressed how much her mother means to her and that she’ll never let anyone cross the line and trash her name.

El-Morshedy also went on about how people have nothing better to do nowadays but cyberbully others and ruin their happiness and accomplishments with a simple insensitive comment. And unfortunately, we have to agree with her.

Because we tried to put ourselves in her shoes, and couldn’t handle the thought of someone making fun of our parents online just because they didn’t ‘feel‘ the way they were happy for us. Or because they think they ‘overreacted‘.

It’s really strange how some people deliberately give themselves the right to judge the way someone shows their happiness. And we still can’t believe how things escalated. What about you guys? Do you think those comments had no intention of hurting Nourhan and her mom, or was it just straight-up bullying?