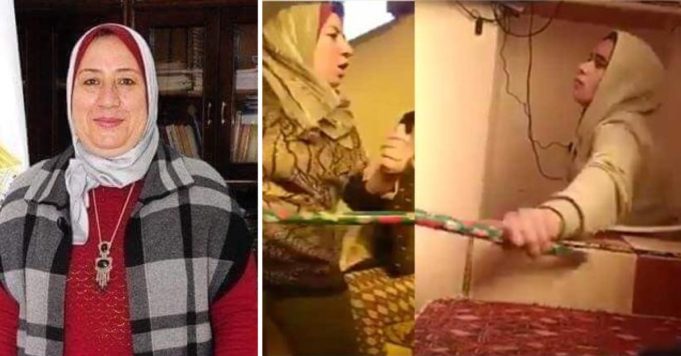 Yesterday, January 28, a video of a woman brutally beating up a teenage girl went viral on social media. Turns out, the video is taken in an orphanage where this lady is the manager. Another incident that proves how some Egyptian orphanages are basically concentration camps!

The video uncovers the abuse and brutality orphan children are subjected to in such institutions, that are supposedly meant to provide them with care and comfort, but are evidently doing the exact opposite.

The woman you can see in the footage brutally holding a stick and beating the life out of a crying and screaming young girl, is allegedly the owner and manager of an orphanage called “Nahr El Hayah” in the 10th of Ramadan district.

A typical scenario where the supposed protector is actually the abuser. What’s even more ironic is the fact that she is allegedly also the vice president of the Psychological Health Department in a renowned college!

Once social media erupted with angry users, forces of law moved to the location of the orphanage and now the abuser is in custody under investigation. But to make matters even worse, a severely injured 6-year-old kid was also found there!

Meanwhile, one of the orphanage’s supervisors justified the horrible abuse in the video by saying that the teenager is known for her scandalous unyielding behavior.

She went on to call her a rebellious girl who is a smoker, a frequent runaway who needed a “little discipline”.

As if, any of these claims justifies child abuse. As if, there’s any possible reason behind such a terrible crime!

This is not the first time we see a similar video. And if there’s one lesson we ought to learn today is that some orphanages are places of abuse, threat and horror.

If you’re wondering why the Egyptian street is basically a crime circus, this is why. These are children who are born to the world parent-less and are still shown no mercy. Do we really expect them to be respectable citizens?

We do appreciate the police and the Ministry of Social Solidarity’s rapid efforts. But we still can’t tell for sure what the fate of those children will be. Let alone, the fate of all the children in the rest of the Egyptian orphanages.

Honestly, we won’t call for the introduction of more laws. Because we do have those. It’s the execution we should work on. We mean, we’re sure justice will be served in this case. But why wait to take proper action only when a catastrophe takes place?