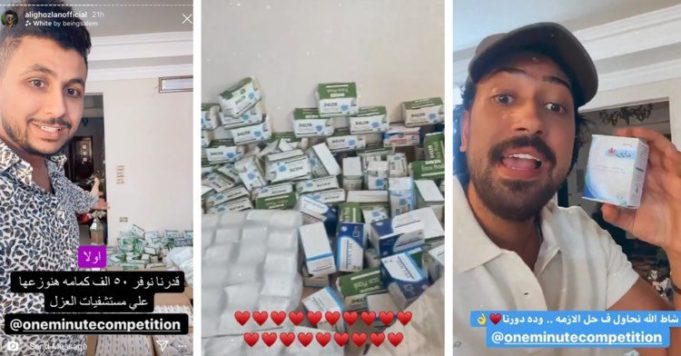 In the middle of a pandemic, one can only imagine how social media influencers would be keen on giving back to society. Sadly though, it seems like this isn’t the case with our Egyptian so-called “Influencers”.

Is an active hashtag right now, calling out for authorities to tackle the whole Amr Rady and Aly Ghozlan scandal and requesting an immediate investigation on the hows and whereabouts of the alleged medical supplies. here’s how it all began…

A couple of days back, June 21, and as Coronavirus continues to take lives and sicken others, two Instagram influencers thought it would be a good idea to use the tragedy for their own benefit.

Amr Rady and Ali Ghozlan made an announcement about some sort of competition. Which is no news, it’s basically how they get all the followers and build their personal brand. HOWEVER, this time it’s a different case.

Putting on display thousands of medical supplies at their own home and asking people to follow accounts (same old influencer trick) in order for them to start distributing those around quarantine hospitals is just DISTURBING, to say the least.

How did Rady and Ghozlan get their hands on these large quantities of medical supplies, in the first place? Most of these supplies are pretty much unattainable right now, due to shortage and heavy demand, at local drug stores and hospitals. Medical staff is actually losing lives over this shortage!

Not to mention the fact that they are emotionally- manipulating people into doing a good deed. And for what? Some followers and new brand deals that’ll eventually only get Rady and Ghozlan more money?

Like if you’re already capable to help people at need, why indulge in such shady deals and sponsorships to do it? There’s a limit to how much we’re willing to take from these “influencers”. A good intention will be overlooked if you use the wrong mean.

Seriously, can they stoop any lower at this point? They’re not only detached from the tragic reality of thousands of people, but they’re also actively adding to their misery and using it to get more reach and eventually more rich. Honestly, a limit should be set on how low a person can get.

Everybody’s at fault here. Amr Rady and Ali Ghozlan, people who’ll take part in such competition, and the medical supplier who approved this deal.

Authorities need to move fast and start an open investigation on how this situation got here. As for us, let’s all call Rady and Ghozlan out on this scandal and put an end to this.