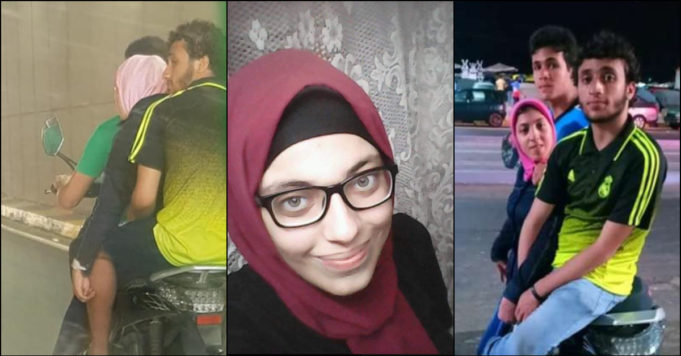 The truth about the “Motorcycle kidnapped girl” has finally been revealed, and it seems like everything we believed was a lie, up to and including the fact that she was never kidnapped.

Over the past couple of days, several pictures posts, and stories have been shared on Facebook about an allegedly kidnapped girl that became publicly known as the “Motorcycle Girl”.

As always, social media is not the most reliable source and each story has several different scenarios. And the “Motorcycle Girl” story is no different. But luckily, it only took this story 3 days to go through its full life cycle and finally land in truth ville.

But in case you have -somehow- managed to never hear about the story, to begin with, here’s a rundown of the whole thing.

It all started when this post was published in one of the most wildly public Facebook groups on Sunday, June 23rd. 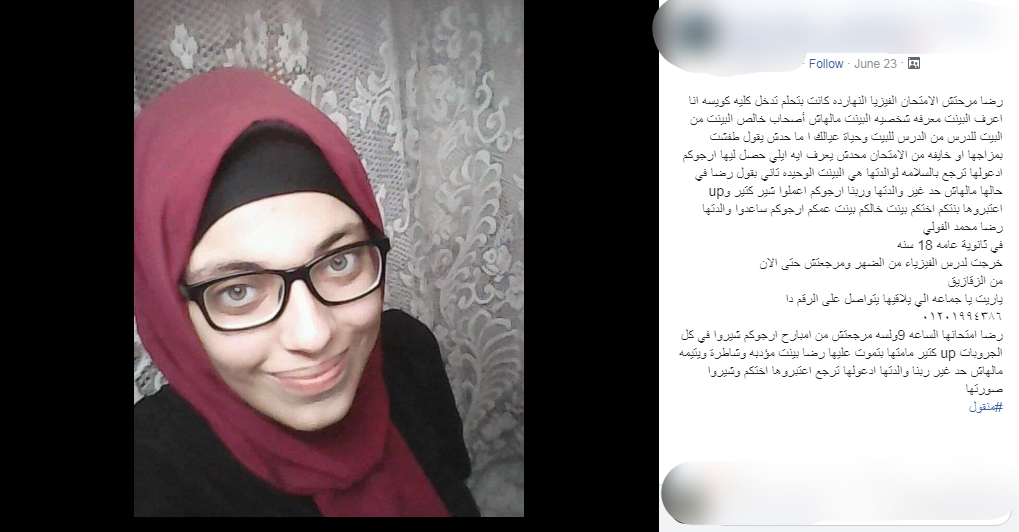 The post indicated that the girl in the picture who’s named “Reda” has been missing for more than 24 hours.

The girl is reportedly a secondary school student from Zagazig who has gone out for a physics lesson on Saturday noon but never returned and didn’t make it to the exam the next day.

According to the post, it is highly unlikely for Reda to have deliberately disappeared, and something must have happened to her. So naturally, her mother is absolutely freaked.

The purpose of the post was to get people to try and help find her in every way they can, in the least, by sharing her picture everywhere so maybe someone will know something.

So naturally, people shared Reda’s picture and reported her story trying to help find her. Which resulted in Reda’s story going extremely public. So it wasn’t long a follow-up story started popping.

Reda’s Transition into the “Motorcycle Girl”

The post -which has now been removed- told the story of how Muhamed saw a girl which seemingly looked drugged up, sandwiched between two guys on a motorcycle, as he was driving to work.

So he thought it looked suspicious and took a video and pictures of them -which he posted- then rushed to tell the nearest police officer he could find about what he saw. 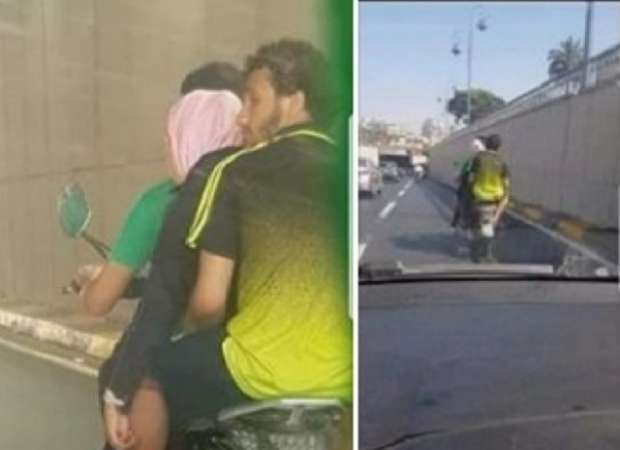 This whole incident -reportedly- happened in Alexandria. And according to most of the stories that spread online, the police officer chased after the motorcycle in the pictures, saved the “kidnapped” girl, and arrested the two guys.

Despite the fact that the pictures Muhamed posted did not show the face of the girl on the motorcycle, she was quickly identified as the missing high school student from Zagazig, Reda El Fouly.

And just like that, Muhamed became a social media sensation and Zagazig’s hero. And everyone started singing praises of the man who saved Reda from awful dangers.

But it wasn’t long until a counter story appeared.

The truth of the “Motorcycle Girl”

Yesterday, a video by a young boy named “Alaa Mahmoud” started spreading all over Facebook clarifying the whole “kidnapped motorcycle girl” story, and the content of the video was shocking, to say the least.

Apparently, Alaa was the person driving the motorcycle or scooter in the pictures that spread online. Only, it wasn’t Reda that was sitting behind him, it is his sister Mayar who was neither drugged nor kidnapped. And behind her was sitting their third sibling Marwan.

According to Alaa, Muhamed Saaid who took the video and pictures did not stop them, nor did a police officer, and that Alaa didn’t even realize that someone took their picture.

He also explained that he and his brother Marwan were taking Mayar to some sort of rehabilitation center because she suffers from a slight disability which is why Marwan sat behind her to make sure she doesn’t fall off the scooter.

So in short, nothing about the story that spread across Facebook is true!

According to Honna El Watan News, they reached out to Moharam Bek Police Department, where they supposedly took “Reda’s kidnappers” and the police department stated that there is no record whatsoever of any similar reports or incidents!

Naturally, and thanks to the power of social media, in just a few hours, all the people that were praising Muhamed as some sort of a modern hero started bashing him for making the whole thing up.

This is when he took down the post and wrote another one ‘supposedly’ sorting things out.

According to Muhamed’s new post, he never claimed he saved anyone or that anyone was kidnapped in the first place. And that all he did was take the video and tell a police officer about it then head to work.

He also stated that he never said he knew what happened to neither the girl nor the boys and that he never claimed this girl was Reda. He also said that he was just as surprised as everyone when he saw Facebook pages praising him for saving the Zagazig missing girl.

However, as we mentioned, all the police departments around the area where this incident took place confirmed that no police officer was approached or told about a kidnapped girl on a motorcycle.

Also, one can’t help but wonder why Muhamed never denied or clarified any of this before Alaa published his video!

And even though, now that the truth was out, thanks to Alaa’s video, this real-life drama was far from over. Because now, the police did, in fact, get involved.

According to Alaa, after several people wrongfully accused him of stealing the scooter, he, Mayar, Marwan, and their parents went to the police to clarify everything and prove that it is his scooter and that all of the accusations spreading online has nothing to do with the truth.

Alaa made sure to repeatedly thank the police officers for speeding up the process and making it as easy as possible for him and his entire family.

He also added that Muhamed Saaid and his family were also brought into the police precinct and an official report with the whole incident was issued.

After which, they were all taken to the general attorney’s office where Alaa and his family were let go but Muhamed was kept in custody for 4 days under the ongoing investigations.

Despite of everything, Alaa stated that he did not want that for Muhamed and that he was not seeking any sort of revenge. He just wanted to clear his name of all the accusations he was receiving due to the originally false claims made by Muhamed.

However, he did emphasize that Muhamed being held in custody was not his choice nor desire and that it was the authorities’ business over which he had no control.

He then expressed his sincere sympathy with both Muhamed and his family and wished them the best. Showing a truly staggering level of grace and forgiveness.

He then thanked all the people that interacted with him and his family and supported them through it all.

However, now that we know it wasn’t Reda on the motorcycle, we still need to know what did happen to Reda.

According to several sources who’ve reached out to Reda’s mother, Reda is safe and sound back home and she was -obviously never taken on any motorcycles nor drugged up.

Reda’s mother also stated to Honna AL Wattan News that Reda did go to Alexandria because some woman lured her to go with her, but no further details were revealed. All we know is that after arriving to Alexandria, Reda asked people to help her take a ride back home and was shortly back to Zagazig.

Obviously, we are extremely thankful and ecstatic to know that both the Zagazig Girl “Reda” and the Motorcycle Girl “Mayar” are both fine and far from any harm’s way.

However, we are getting a bit restless with the constant fabrication of the truth. And if we may quote Alaa’s wise words at the end of his last video; “We all NEED to make sure something is true before we believe it, more importantly, before we spread it.” Because spreading lies has no other name but DEFAMATION and it is ILLEGAL.

So let’s ALL learn the lesson here, people. Just like social media helps lies to spread fast, it has an even faster route for the truth to come out.