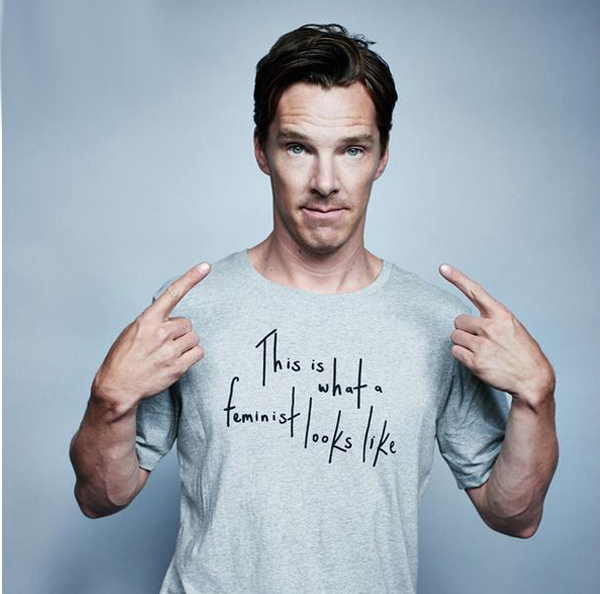 A lot of women refrain from associating themselves with the word “feminist”, because in the eyes of many people, it is synonymous with “man hater” and “butch”. It’s only natural that more men would have the same attitude. Most men would squirm and guffaw at the mention of the ‘f’ word, because the media and society have long been portraying feminists as rabid men haters. It’s time all feminists united and gathered all of their anti-feminists partners and nudged them in the right direction. This is how you turn your partner into a feminist:

1. Explain to him what feminism is

If you have ever asked your partner if he’s a feminist, and his answer was a firm “no”, then make sure he has the right understanding of the word. “Feminism means believing in equal rights for men and women,” is an uncomplicated, succinct answer that is sure to satisfy him. Don’t explain it in a complex way that makes him think there’s more to it than achieving equal rights between men and women, because that is the actual definition of the word. Break down the stereotype that feminists believe women are better than men and that bashing men is what feminism is about. Simply, explain to him that feminists are those who believe that men and women are equal and that all individuals should be judged by their abilities rather than their gender.

2. If he already believes in equal rights for men and women, explain to him that this makes him a feminist

Sometimes those who do believe in equal rights between both genders still don’t like to refer to themselves as feminists due to all the misconceptions, stigmas and negative connotations associated with the word. Your partner might not like the word, but if he says he believes in equal rights for men and women, then he needs to understand this word he hates defines a part of his personality. Therefore, whether he chooses to be identified as a feminist or not, his beliefs inherently make him a feminist. Maybe he just doesn’t feel that the label properly represents him because of the misogynist man’s line of thinking that all feminists blame men for everything. Whatever the case is, let him know that it’s never the words or labels that matter as much as the actions do, and yet identifying him as a feminist shouldn’t make him feel ashamed.

3. Show him what a feminist looks like by actions not words

Simply, be a feminist example. He will reach his feminist potential when he starts to reflect your feminist values, and the only way he will do that if you lead by example. Balance the dynamic of your relationship and don’t expect him to pay the tab, or be the one who spoils you and treats you like a princess all the time.

4. Call him out on sexist comments

People laugh at sexist jokes all the time and think it’s okay or acceptable because it’s “just a joke”. People, especially anti-feminists, always assume that feminist women don’t have a sense of humor because they refuse to laugh at an offensive joke. Refusing to normalize a situation that is abnormal does not make us humorless. If your partner ever engages in offensive commentary, makes a sexist comment or laughs at one, call him on it and explain why it offended you.

5. Make him read about feminist organizations for men

Maybe he never associates himself with the cause because he feels like the feminist community is directed by women at women and that there’s no place for men. Get him involved in the scene and show him that men can be feminists too. Show him that men are crucial to the feminist cause, because feminism liberates both genders. Expose him to the feminist organizations, which target men such as HeForShe, the National Organization for Men Against Sexism and Men Can Stop Rape.

6. Be rational and not pushy

If you have a strong argument but your reasoning and method of communicating it is aggressive and pushy, your message will never get through. This applies on all fields of life. To start changing your partner’s opinion of feminists and push him in the right direction, you can’t be on the attack all the time. You have to take into consideration that he was brought up in a male-centric society, so it’s only natural that his core beliefs are muddled by years of being taught the wrong lessons. Bring up the subject of feminism lightly and only when it’s relevant. If you push him to discuss the subject all day every day, he will get bored and lose interest. Be smart about picking the right time to question his feelings and thoughts about patriarchy, sexism and misogyny, because timing is very important.

7. Argue that “feminist is manly”

Society and culture tells men that being identified as feminists makes them girly and questions their manhood. But it takes strength for a man to admit that men and women should be treated equally. It takes strength because this is confessing that men should be able to cry without being emasculated, that they have every right to express their emotions without society labeling them as weak. Only men who are absolutely confident in their sexuality and manhood would gladly admit that feminism is needed and necessary to both genders.

And now that you’ve turned your partner into a feminist, some people would advice you to thank him for being an ally and for being open to the idea of feminism. But, I say don’t! The truth is, he should thank you for bestowing upon him the most precious skill of all: common sense! However, do be proud of him for standing up to women’s rights and for being the man that he is, because most men wouldn’t bother with being feminists.