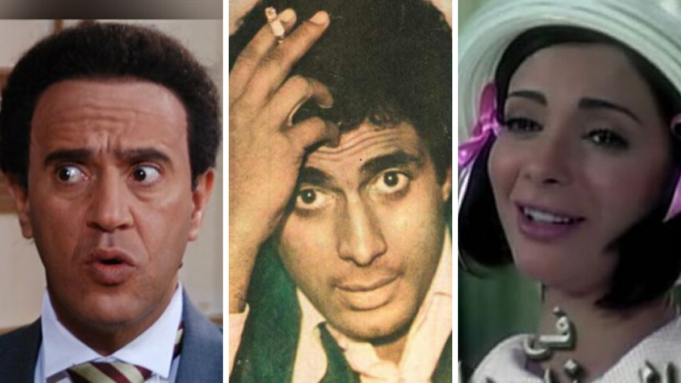 If you’re an Ahmed Zaki fan or just a normal Egyptian (aka an Ahmed Zaki fan), you’ve probably heard the news. Mohamed Ramadan will star in a show about the late actor. And you probably have a lot of opinions on that – we know we do! But we’re not here to talk about that now.

We’re here to talk about this: Has any biographical Egyptian series ever been, you know…good? See, everyone remembers the trend of actors going for roles about the life of a late celeb but we have to remember why that trend stopped – some of those shows just sucked.

Can you see where this is going? Yes, without further ado, we’re going to be rating the best and worst biographical Egyptian TV shows ever made. Buckle up, it’s going to be a ride.

Some famous people aren’t meant to be portrayed in biographical TV shows. Think about it – how come everyone unanimously agrees that both the TV show and movie made about Abdelhalim Hafez were the worst?

Maybe what makes the show a little worse than the movie is all the effort that went into making it. There was a literal nation-wide competition about who would get to play the role of Abdelhalim and that still didn’t stop Medhat El-Adl from saying everything failed because of the lead actor’s lack of charm….and of course, the notorious contradictions in the show’s final script.

A show so bad it literally made its lead actress switch careers, Alby Daleely probably thought it was heading off to a great success before its ultimate failure came through.

Here’s a thing we noticed might have helped– maybe don’t put a first-time actress into the shoes of Layla Mourad because that’s just an exercise in anxiety.

Perhaps one of the most overlooked biographical TV shows ever made, Abo De7ka Genan delved into the highs and lows and rags-to-riches-to-rages story that was Ismail Yassin’s life. And as accurate and true to life as it tried to be, the show failed to explore many aspects of the star’s life.

Not to mention, of course, that it got some details—how Beshara Wakim is portrayed only speaking in a Lebanese dialect even though he was born and raised in Egypt and used Lebanese Arabic mostly for acting—wrong. A sign that things aren’t going well for a biopic.

Okay, so as badly-received as this show was, it admittedly wasn’t as bad as the three previously mentioned. That reason alone is why it’s getting the rating it’s getting now. The show did some things well, we can’t deny that, but others….not so much.

Artistically speaking, it wasn’t all that, but we don’t want to get into it (or getting into how Wafaa Amer was playing a 15 year-old at one point). Here’s something that will make you better understand the show – Ragaa El-Gedawy, Taheya Karioka’s niece herself, had attacked the show which kind of makes it clear she wasn’t consulted on the script. Grave mistake.

Say what you want about Asmahan’s color palette being so blue it makes the first Twilight movie look colorful in comparison. The series went into Asmahan’s life in Egypt, pinning down little family details and the starlet’s own life without making us feel like we missed something, as viewers.

And not to mention, of course, that it successfully introduced the water/drowning motifs pretty much since episode one, which makes the ending to Asmahan’s suspenseful life all the more poignant.

Yes, before we get into it, we know. This story is full of contradictions but, for the most part, El-Cinderella does Soad Hosny’s life as much justice as it can as it tries to portray the late star’s eventful, roller-coaster life.

Here’s one more thing it does right. It lays the all-too-known mystery about Soad Hosny’s death so thick, with the flashbacks and flash-forwards to the memoir sessions, right from the start, it unintentionally keeps you glued to your seat so you can see what led to her painful death.

If you called it, enjoy the satisfaction now. It’s understandable that a show about Egypt’s greatest singing icon would be the most watched biographical TV show ever, but it’s rare to have both the viewership and the accuracy.

To put it into context, this show stuck to the facts and the figures about Um Kulthum’s life and long career as well as chronicling Egypt’s transition from a monarchy to a republic under both of its first presidents – and do you know what people found when they tried to pinpoint mistakes? A little mistake in the selection of oud choice. The show is that good.

So, will Mohamed Ramadan do Ahmed Zaki justice? Who knows. All we know is sometimes biographical TV shows work…and sometimes they fail spectacularly.