Identity Magazine
Home Trending We Interviewed Ahmed Walid Who May Turn Out To Be A Fraud!
Facebook
Twitter
Google+ 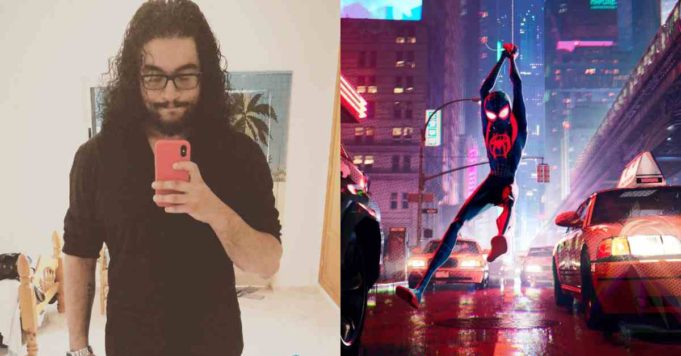 Editor’s note: This article is originally the interview we had with Ahmed Walid. Instead of writing a new article, we decided to edit the original interview since we’re trying to rectify our mistake, and also to make sure he wouldn’t use it as evidence for his “credibility”.

Ahmed Walid, the Egyptian artist that made us all proud of his work on an Oscar-winning movie might be lying and we are kind of devastated -and to be honest, embarrassed – about it!

But right after the Oscars, Egyptian artist Ahmed Walid got everyone talking about and celebrating his work as a visual effects coordinator for the Oscar-winning animated film, Spider-Man: Into the Spider-Verse.

Everyone was extremely proud, but it quickly turned into a huge shame. How did it go from a matter of national pride to public shaming?

It all started after the Oscars ceremony when Ahmed wrote a Facebook post gushing over how proud he is of his great accomplishment.

He shared his IMDb page with his Oscar-winning movie, thanked his team in Disney, and wrote: “We won”. 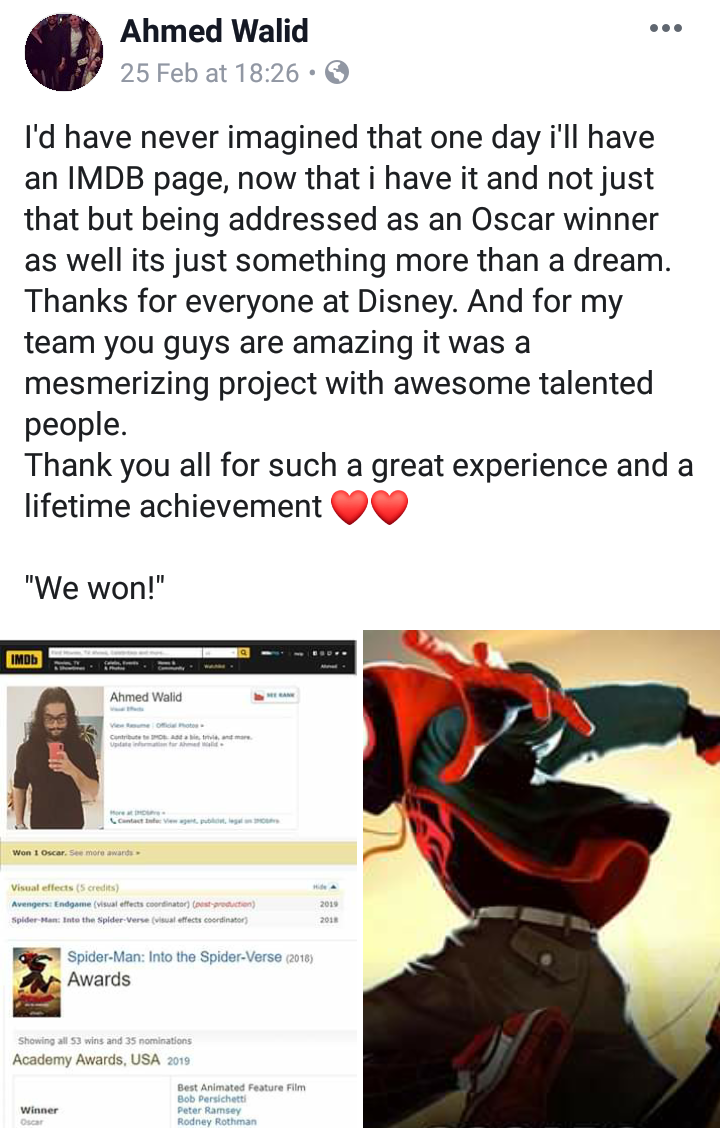 When we saw the Facebook post (which now doesn’t exist) and checked his IMDb page with all the movies in it (which is now empty) we, ourselves, hopped on the Egyptian pride hype train.

So we interviewed Ahmed Walid to talk about his work in Spiderman and of course, ask him how it felt like to be a part of an Oscar-winning movie!

In the interview, Ahmed talked to me in details about his work in several other huge-production films, such as the Avengers and Fantastic Beasts.

He also talked about his work in Spider-Man: Into the Spider-Verse and how this is only the beginning for him.

We were very proud and happy to help share Ahmed’s “success story” with the public to inspire a lot more artists.

It all felt too good to be true, and it might just be…

The Other Shoe Falls

A couple of days after the interview, several people started contacting us claiming that Ahmed Walid is faking his Oscar win and that he never worked on Spider-Man: Into the Spider-verse.

Ahmed, himself, started facing fire with people calling him a liar in the comments section of his celebratory Facebook post (before he removed it).

Not only that, some also started saying that his IMDb page is fake and accused him of photo-shopping the whole thing!

We had recently checked his IMDb page and seen for ourselves that it did, in fact, contain the movies he said he worked on.

But after we received these messaged and e-mails, we went to check it again, and found it to be completely empty!

Needless to say, things pretty much started to fall apart from there.

“Thanks for everyone at Disney”?

In his post, Ahmed thanked his team in Disney, even though Spider-Man: Into the Spider-Verse is a Sony Imageworks production.

We thought this could be understandable if he was outsourced to work on the movie through Disney since Disney owns Marvel Studios.

However, one of the people that contacted us sent us the official credits for everyone involved in the movie as posted on Instagram by the company itself. And Ahmed’s name was nowhere to be found.

Here is a full list of everyone involved at Imageworks in making the Oscar award winning animated feature: Spider-Man: Into the Spiderverse 🏆🕷#spiderverse #imageworksvfx #oscars

To be more conclusive, we also checked the credits that roll at the end of the movie, and Ahmed’s name was still nowhere to be found. 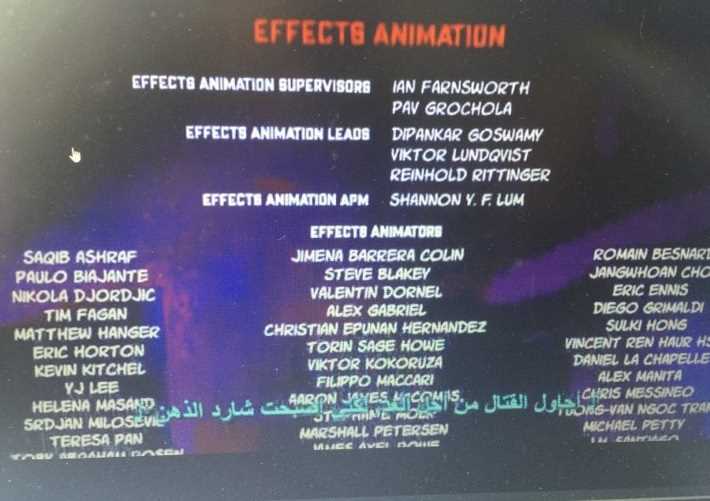 A justification that Ahmed gave (to other publications) about these previous claims was that he worked on the movie for six months through another company called Cinesite Studios in Germany.

However, there are two incorrect things about this statement.

A. The movie was solely produced between Vancouver and Los Angeles. It did NOT take place in London, nor Germany.

B. Cinesite Studios’s branch in Germany is called Trixter. And neither Cinesite Studio nor Trixter had anything to do with the VFS work for Spider-Man: Into the Spider-Verse. Which can be proven through the filmography lists on their websites.

We were still clinging to the last shred of hope which was Ahmed’s alleged work on the Avengers movies, according to another Facebook post of his. 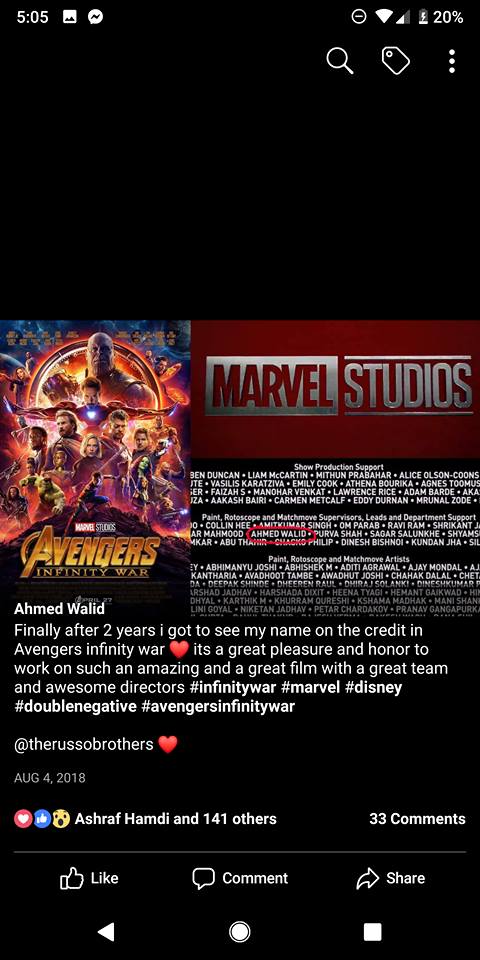 But when we went to check the credits list for Avengers: Infinity War. Ahmed Walid’s was, yet again, missing…

We found, however the name of two other Egyptians; Ashraf Ghoneim as effects supervisor, and Ahmed Mostafa as effects technical director.

So I guess, silver linings?

Even though we were presented with several clues and evidence, we still wanted to give Ahmed Walid the benefit of the doubt. So we contacted him and asked him for a reply to all these claims.

Before I could even ask Ahmed about anything, he seemed as if he already knew what I wanted to ask him, understandable, of course, since everyone has been questioning him about the same thing.

Regarding his IMDb page which was now empty, he claimed it is currently being verified and will re-appear soon with all his work, saying: “If it’s about my IMDb page, then if you waited just a day or two, it will be back with all the work I promise.”

When asked about his work, he said he’ll send a confirmation letter from the company to prove his work. He asked me to wait a day until he can get it since Sunday is a weekend there and he couldn’t reach the company.

I understood and asked him to do a follow-up interview to clear everything up after he gets the letter, and he agreed.

So we made a deal I’d hear back from him in 24 hours with the letter to do the interview.

He seemed very cooperative, confident, and even a little eager to send me all the confirmations that I needed.

Now it is two days later, and Ahmed is still a no-show.

We gave Ahmed the benefit of the doubt up till the very last second, and we sincerely wanted to believe him, because we were all very proud of him. However, since he did NOT co-operate with us to help him clear his name, we had to pull the interview and report the updates on the story.

We are still not calling anybody a liar, however, we are not very celebratory either. We do hope Ahmed either tries to clear his name or come clean in the near future, though.