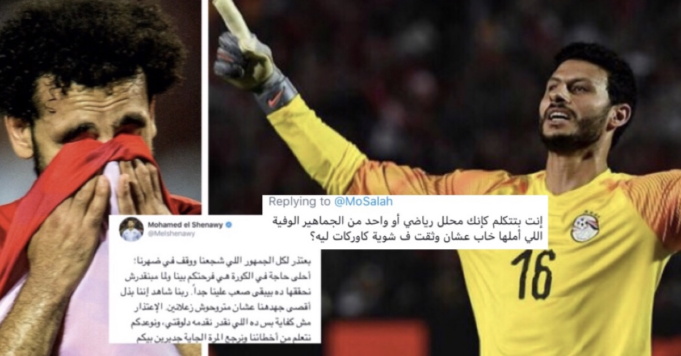 After Egypt’s scandalous exit from the Round of 16 of the 2019 Africa Cup of Nations, the disappointment that hit the feels of every single Egyptian is inexplicable. But did the National Team even apologize for it?

Regardless of how arrogantly they exited the pitch after the loss against South Africa, since none of them even bothered to salute the fans that had been filling the stadiums for days in order to support them, still some of them issued public apologies, but later.

However, we spotted the drastic differences between their words. And well, we were, again, sadly disappointed.

For starters, Liverpool forward Mohamed Salah was the first to make a social media presence after the disaster. And honestly, some of us wish he hadn’t. Because first, it wasn’t even an apology. 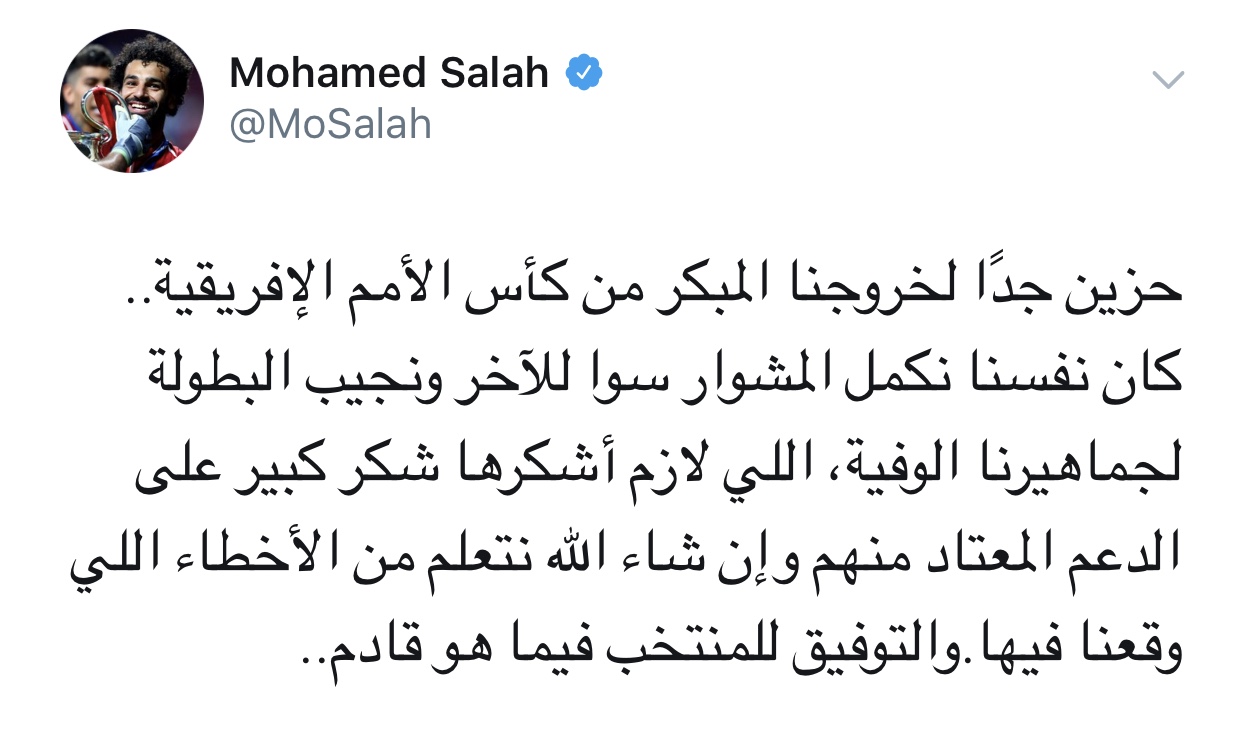 Salah didn’t even utter the words “I’m Sorry“, “We’re Sorry“, or “I apologize“; none of that. It was like he was forced to comment on what happened to save his image. It’s like he didn’t even care; he only expressed HIS ‘sadness‘!

Keeping in mind that Salah actually owes so many people another apology already for siding with the sexual harasser Amr Warda.

That being said, a public apology was made on Twitter from midfielder Ali Ghazal, who currently plays for the Portuguese Club Feirense. 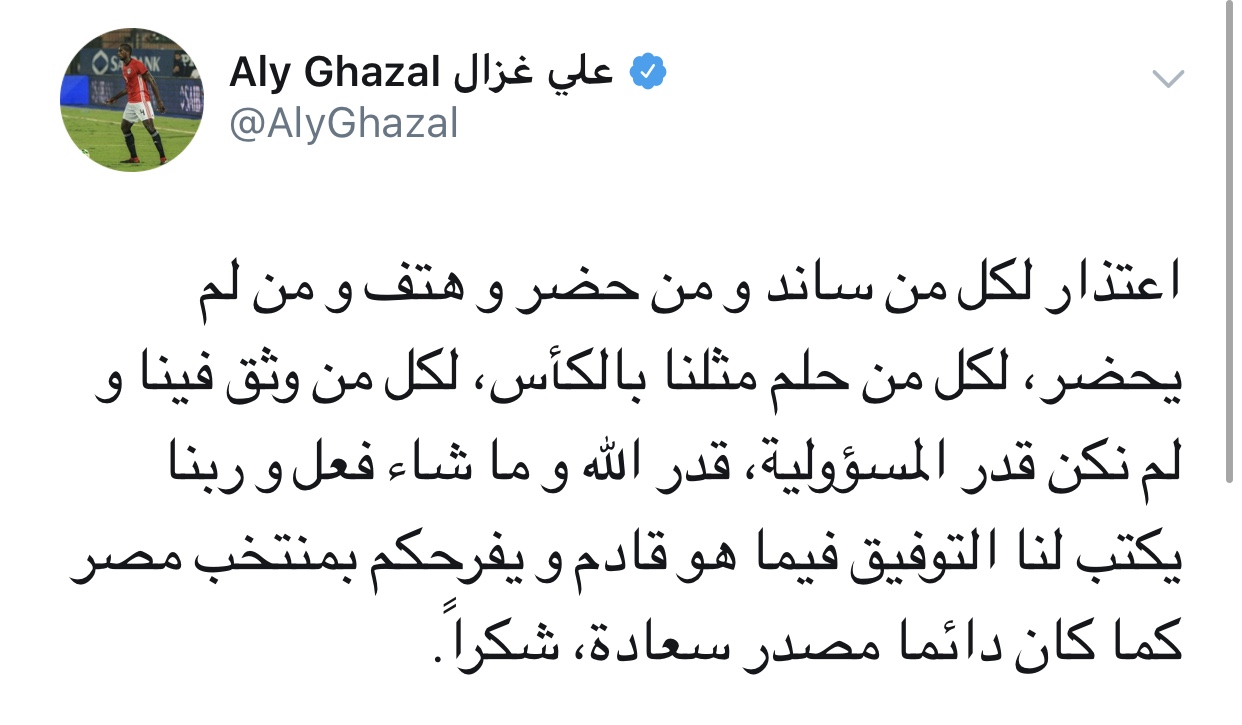 It’s worth mentioning that Ghazal’s words were so touching as he addressed everyone; from those who went to the stadiums to those who only dreamt about Egypt winning the African title for the 8th time.

It’s worth mentioning that Ghazal did not even participate in the games to begin with. The guy only partially played in the friendlies that were held in the months before the AFCON kicked off. And was a substitute for the whole tournament.

Therefore, he should be the last person to apologize.

Speaking of those who actually SHOULDN’T apologize; Al-Ahly and the National Team’s goalkeeper Mohamed El-Shenawy also issued an apology. But the differences between Salah’s words and his, are huge.

First of all, El-Shenawy is basically the last person anyone should blame for the defeat. If anything, the guy literally killed himself on the pitch in order to save our net. And if it wasn’t for him, we would have exited from the group stage, not the Round of 16.

Also, we shall not forget that he is the first Egypt goalie to ever maintain a clean sheet in the AFCON’s group stage. So, in conclusion, the guy is a hero. 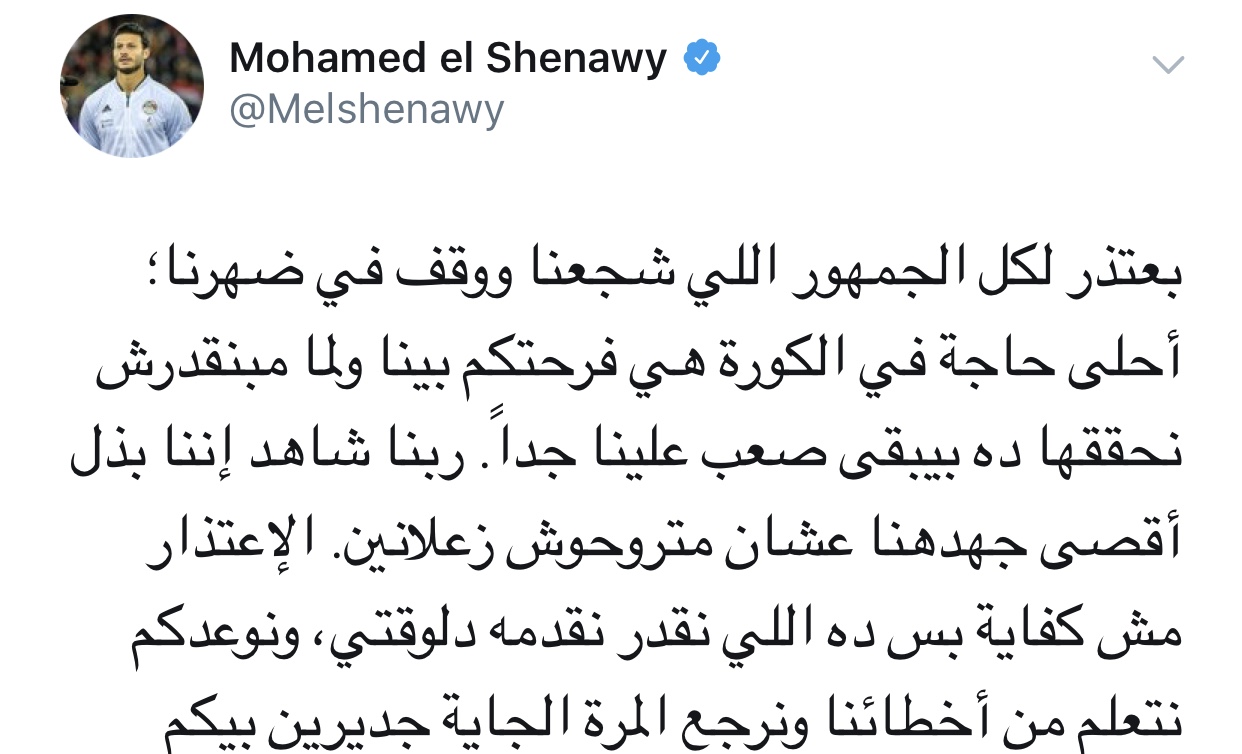 However, despite his humongous efforts and the fact that him and Tarek Hamed were the only consistent players who deserve all the praise, El-Shenawy still felt the need to apologize to us.

And he did it in the classiest most sincerest way.

As for the rest of the National Team; they are nowhere to be found. All of them have disappeared on social media, and the only appearance we spotted was a couple of pictures of Mohamed Salah with fans at the hotel, before he left.

But we still don’t understand why Salah didn’t actually write a full respectful apology? Why did it seem rushed and well, unapologetic?

All we know is that we don’t deserve this. What we deserve is an explanation and a well thought out apology. Most importantly, we deserve to understand what are the next planned steps to rectify the World Cup and the AFCON’s mistakes. Also, we’re pretty sure that the way they so ignorantly left us heartbroken and in shock at the stadium, was not normal.