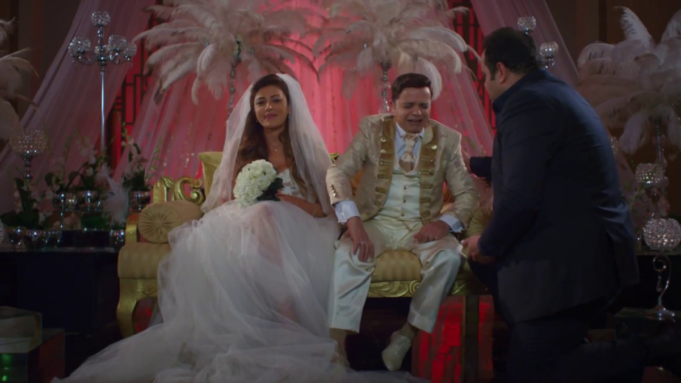 By perk of being Egyptian, we’ve all been to our fair share of weddings. And all of those weddings, no matter whose they were or how they went, share exactly one thing. The newly married couple’s first dance and their secret whispering to go along with it.

For years, we’ve all seen these whispers and always wondered. Just what do they talk about during the dance? And well, according to one online thread we’ve found, we can finally rest easy for knowing the truth.

And, yes, it’s nothing you expected!

“I’m not paying for any extra wedding surprise!”

At parties, people usually like surprises….that is, of course, unless this surprise will cause an unprecedented hole in their pocket. And, yeah, this kinda happened here.

“We were just dancing and having a good time,” one bride wrote. “And then, the wedding staff started putting up those faux-fireworks things and my husband couldn’t stop looking so he just told me he wasn’t paying for anything that wasn’t in the wedding package.”

“Don’t think I’m going to carry you with that heavy dress you have on!”

Sometimes, the conversations at these slow dances are just practical. You know, kind of like little warnings that you’re going to need up ahead. This bride will tell you about it.

“He was being a little too petty because I got this really heavy dress and he didn’t want me to get it,” she said. “Because he wasn’t going to know how to carry me with it on.”

“We were actually gossiping about the attendees.”

Didn’t you really see this coming? What’s the best thing about having a huge party, if it’s not the gossip that comes right after?! And sometimes, this gossip doesn’t really wait.

“A lot of our relatives were stirring up drama,” the bride said. “So, we really couldn’t help it. We just started talking about everyone — aunts, cousins, uncles…everyone!”

“The idiot literally yelled in my ear.”

Comedy doesn’t come with a specific set timing and that’s something we all need to remember. Just because a bride and groom spent months preparing for one big event doesn’t render them childishness free — just look here!

“He leaned in as if he was going to say something all romantic,” the bride said. “And then he screamed in ear. Literally.”

“He was too busy looking at his friends to talk to me, so…”

You know what’s actually kind of heartwarming but still very annoying? Being at a wedding, your own wedding, and being ignored by the person you just married. Like this blushing bride.

“I kept trying to talk to him,” she said. “But he didn’t even listen because all his friends were cheering him on. He just kept smiling and joking with them.”

“He told me he was going to pick me up and spin me; I told him I’ll slap him.”

Hey, know how all couples like to do this thing where the groom picks the bride up to spin her around and it’s all cute? Yeah, sometimes, the discussions beforehand aren’t as cute as that moment. Just read this.

“He kept trying to convince me to let him pick me up, all describing what he was going to do and stuff,” the bride said. “But I didn’t want to so I said I’ll slap him if he does it….I didn’t slap him, though.”

“I didn’t actually hear what he was saying, so I was pretending to laugh.”

And sometimes all that laughing that is so cute and fluffy and romantic that it looks kinda fake, is actually fake. Not in a sinister way or anything. More like in the way that’s like I-didn’t-hear-so-I’m-avoiding-awkwardness scenario.

“He was chatting me up,” the bride said. “And it looked like he was joking, I think, but the music was so loud I couldn’t hear what he was saying…so, I just did what I do best and I pretended to laugh!”

Well, there you have it! Mystery solved!