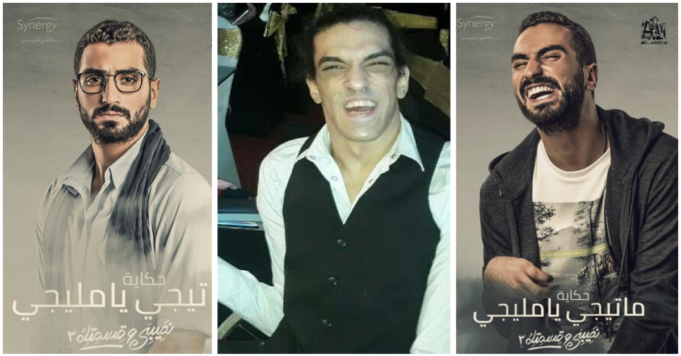 Yet again, the brilliant Egyptian series “Naseeby W Esmetak” turns heads and catches eyes for what feels like the thousandth time! But this time, for very different reasons. And it’s all because of Mohamed El-Sharnouby and Amr Mahmoud Yassin!

The recent 5-episode-story that’s part of the 3rd season of “Naseeby W Esmetak” started airing on October 20th. Titled “Ma Teegy Ya Meligy” and starring Mohamed El-Sharnouby and Huda El-Mufti, the story is written by Amr Mahmoud Yassin and directed by Mostafa Fekry.

We could safely say that it was one of the most emotional and beautiful stories that were written for the series. Because as soon as the episodes started airing, people were immediately hooked!

“Ma Teegy Ya Meligy” is about a disabled young man named Hassan El-Meligy who meets a girl online and falls in love with her. She shares the same feelings even before knowing anything about his condition or who he really is.

The plot thickens as the girl discovers the truth along with the fact that Hassan has a twin brother who’s been playing her. And everything picks up from there with the dramatic and romantic events unfolding.

All of that is fine. But you know what’s extraordinary? The fact that the “Ma Teegy Ya Meligy” turned out to be a TRUE STORY. And by total coincidence!

Because just last week, it came to everybody’s knowledge that there’s not only a guy out there with a similar condition to El-Sharnouby’s on-screen character, he also has the same name!

Islam El-Meligy is a young man who was born with cerebral palsy, a condition that occurs due to lack of oxygen to the brain and leads to disability.

On October 24, Islam’s mother published an emotional Facebook post about how it made her feel to see her own son’s story on screen. As emotional as she was, the young man’s mother was also surprised at how they had the same name, even though she has never talked to nor met any of the series’ cast and crew.

It wasn’t long until scriptwriter Amr Mahmoud Yassin made a Facebook post as well, expressing how he felt about this strange but beautiful coincidence.

What we really love about this is that it’s always nice and heartwarming to see art having a purpose and conveying a real and important message. Because let’s face it, this is not always the case when it comes to TV and cinema nowadays.

Especially that Islam’s mother shared that this kind of story and the way it ended gave both of them hope at a better life for the young man.

And most importantly, what’s also beautiful about this story is how it made us believe that anything is possible and that the world is incredibly small. Like, can you guys imagine that something like that could happen BY SHEER COINCIDENCE?

Again, anything is possible! Now you tell us, what did you guys think of the “Naseeby W Esmetak”‘s “Ma Teegy Ya Meligy” story and how do you feel about the new surreal information?