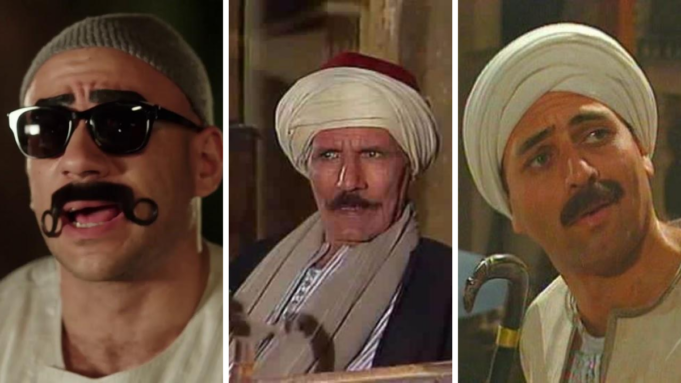 Growing up with entirely too many TV shows set in the Egyptian countryside, you probably saw an article like this coming. But do you really blame us?

There’s a stark difference between excellent, quasi-believable, and bad performances and on the Sa’eedi show spectrum, you can pretty much find it all there.

Because of that, we just couldn’t help ourselves, you know.

We needed to dive in deep to find just who did the quintessential Sa’eedi man justice and who basically took a caricature to the small screen. And you’re about to find out too!

Okay, so it would have been down-right insulting if we started off the “best” part of this piece without mentioning Abdallah Geith at the very top.

And we won’t be at all exaggerating if we said this renowned actor was basically the best of the best when it came to perfecting the Sa’eedi dialect and mannerisms.

AKA Rafee3 Beih, who was kind of the biggest deal ever when this show came out. You basically cannot have a list about the greatest fictional characters from our countryside without featuring him at least once.

See, we wouldn’t be exaggerating when we say Mamdouh Abdelaleem made this role into the performance of a lifetime, from the way he spoke to the way he acted to even his conflicted emotions.

Although El-Kebeer saga was a solely comedic TV show, there was nothing about Ahmed Mekky’s Kebeer that was written as a poor caricature of the everyday Sa’eedi man…and yes, that’s a big deal!

El-Kebeer was written to have other characteristics that all meshed well with his background and didn’t actively mock him. This is without going into the fact that Mekky basically perfected the dialect in a way many others couldn’t.

Wrapping up the “best performances” part, we can’t forget Amr Abdelgelil’s Rayes Harby in Tayea’ because honestly, who could?

It was one of the actor’s few serious roles and he did it justice, going in with the dialect and bringing his own spin without making the performance campy.

So, here’s the thing about this list. Just because it’s divided into “bests” and “worsts” doesn’t mean that the actors themselves are horrible. It just means they didn’t do these parts justice. And now that we’ve gotten this out of the way…

Dialect coaches are there for a reason and that reason is that you need to follow them. We’re not blaming Jamal Suleiman too much, honestly speaking.

As a Syrian actor trying on a non-Cairene Egyptian accent, him deflecting into his native dialect isn’t exactly shocking. However, it does take us out of the mood sometimes and that is kind of not supposed to happen.

Okay, so this one person we’re fully blaming. And yes, we’re biased. See, like everyone else in the country, we’ve all seen Ibn Halal and we all know that Mohamed Ramadan could do a much-better Sa’eedi dialect than the one he chose in this movie, released in the same year.

For the sake of consistence, we’re not even going into how this movie basically took every “Sa’eedi straw-man” joke and turned into a script. We’re just focusing on the dialect and the dialect here sucked.

Like many firsts, Amr Sa’ad’s dialect in his first Sa’eedi-focused TV show was considerably subpar because he needed a lot more practice.

Sure, this might have changed with following TV shows that used the same setting (and he did a lot of those) but we still have to mention this one.

On a scale of Mohamed Ramadan in Wahed Se3eedy and Abdallah Geith in Ze2ab El-Gabal, Amr Sa’ad was at a solid middle here.

Yes, apparently we can have both very good and very “eh” performances from the very same show!

We’re not even harping down on Ahmed Abdelaziz’s dialect that much here because we feel like his over-doing of the accent stems from the actor’s widely-known talent of literally overdoing everything ever.

Yes, we said it. Before you say anything, though, we’re literally specifying one show (just the one) where Mahmoud Abdelaziz was simply not at his very best.

The accent, according to many watchers of Sa’eedi background, just wasn’t that believable and could have used a lot of work. So, really, what can we say if the people represented said that themselves?

Do you agree with our picks?