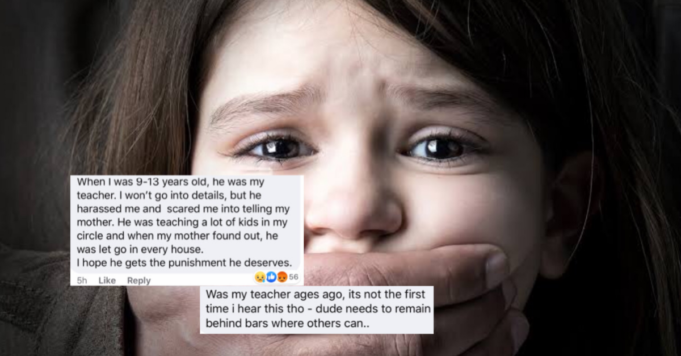 For legal reasons, we won’t be revealing the teacher’s name nor his picture. But it’s safe to say that he’s somewhere between the late 50s and mid-60s.

Just like anyone reading the post, we didn’t find solid proof to lead us to believe this claim is anywhere near true. However, after reading the comments and testimonies of a number of his former students, we just couldn’t believe the magnitude of the trauma.

Some of the comments are even claiming that he was previously arrested for raping a child and sentenced to four months in prison. Unfortunately, we still have no clue whether or not this information is true.

Because a lot of people are basing this information on the fact that he went MIA and was unreachable for four months.

It was heartbreaking to see one his students take to Twitter to express her relief the man is finally singled out because she was one of his victims as a child.

But we’re pretty sure that a matter as serious as this one will hardly go unnoticed. And sooner or later, the truth will be revealed!

Until then let’s just say that cases of pedophilia, child molesting, rape, and sexual harassment in Egypt aren’t at all rare. Which is why a case like this one can’t be far from the truth.

And all of that mainly goes back to the lack of sex education, the undermining of sexual harassment and rape crimes and of course, blaming the women victims instead of making the harassers/rapists face the severe consequences of their horrible actions.

If it’s true that the teacher did actually rape a child and sexually harassed the others, then we honestly don’t know how any of us could ever feel safe again unless the likes of him are put behind bars forever.

We really hope the truth comes out and whether or not there’s more to this story, it should be taken as a red flag to move the authorities to background and psychologically check every teacher and professor before they take this honorable job.

Instead of finding out after years of harassment that an awful crime has taken place, like we potentially are now…

And also so that parents don’t have to worry about the safety of their children in schools and universities. Especially that we’re all pretty aware of the existence of sexual predators and criminals among us.