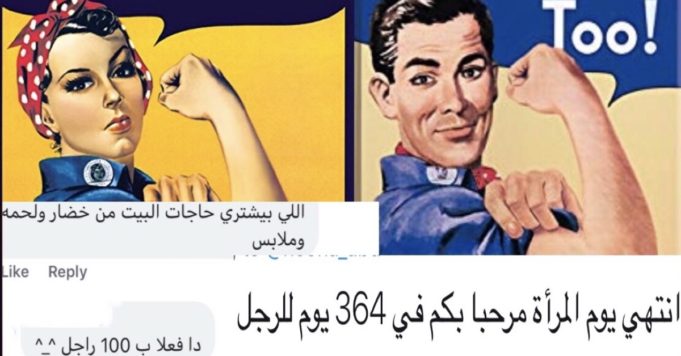 Last Friday, March 8th, women around the world celebrated International Women’s Day. While many people worldwide honored the women in their lives, in Egypt, as usual, it was different.

Our timelines were basically full of praise words for every mother, wife, sister and basically any female. Because, well…It’s called International Women’s Day for a reason.

In the Middle Eastern societies, it’s always more or less the opposite; especially here in Egypt where our patriarchal society highly contributes to putting women down on a daily basis. In addition to underestimating and degrading whatever they do, both directly and indirectly.

Why are we bringing all of that up?

Well, for starters, other than the fact that our timelines were bombarded with ‘jokes’ belittling the occasion – needless to say, from men -; there was a certain company that also shaded women and literally TOOK AWAY their day to ‘support’ men. For God’s sake!

The company posted an ad campaign under the slogan ‘100 Men’. The purpose of the campaign is to ‘lift’ men up and recognize that they too need to be celebrated! What.the.hell?

We’re completely NOT against celebrating men or recognizing their good deeds or achievements, but you guys literally have 365 days a year to do that, brag and celebrate all you want (as if).

But out of ALL days, you decide to go for that ON International Women’s Day? Well, if this was supposed to be a joke; surprise, it’s not funny! And it’s also desperate and sad. What’s also sad are those who are agreeing.

Seriously? When women do this stuff, it’s their job. It’s like they were made to serve the society – their family, husband, and children included – But when men do, it’s because they’re incredible human beings and need to be protected at all costs! PLEASE.

When are we going to finally remove and ignore the societal boundaries that put women in a specific place and glorify men for doing the least, or to be accurate, for doing what they’re SUPPOSED to do?

Why do people usually call a strong, independent and smart woman ‘One worth a 100 men’? What does that even mean? People, especially here in this society, usually tend to forget that women are the ones who tolerate the pain of giving birth, raise the children, take care of their family, their house, their husband AND work. Along with other stuff! And that has been the case for decades and decades.

It’s not because they just want to or because they’re bound to, it’s simply because women have the ability, strength, AND heart. Nothing else, not for anyone! So how could that even be compared to men?

So to wrap up this angry speech, we would like to wish all our female readers happy International Women’s Day! And as Rachel Green once said: Don’t let anyone steal your thunder!

Also, men, stay in your lane! You do and achieve a lot and it’s definitely plausible but why not agree on an international day for men where we celebrate that? It would be pretty cool if it’s NOT on the 8th of March, thank you very much!