That’s one question I find myself wondering about more often than I should. Just take a look at both the local and international pop culture and you’ll understand why I’m always puzzled by whom we consider public figures, or in less formal ways, “celebrities.” We build up this huge glistening bubble around completely irrelevant, basically talent-less human beings and then catapult them towards incessant fame and fortune.

TV and radio shows try and stuff news about the Kardashians down our throats all day long. There wasn’t a block on my Facebook newsfeed that wasn’t covered with news of Kourtney Kardashian and Scott Disick’s breakup for one whole day. Hold up, though, what is this clan famous for? Well, one of them, namely Kim Kardashian was Paris Hilton’s ex-best friend and had a leaked sex tape. That’s IT. That literally is it; this is what caused the Kardashian empire to flourish and gain all of pop culture’s undivided attention.

You turn on the TV and you catch a glimpse of Ramez Galal pranking Paris Hilton as luck would have it. Then, your newsfeed is plagued with news about how Paris received tons of money in compensation and is planning to sue the show. Let’s press pause for a second, shall we? Why is Paris Hilton famous? Sure she’s an heiress, but what has she contributed to the world that would make it viable for her to be such a household name? Zilch, basically. 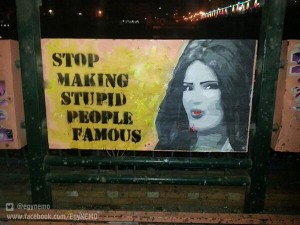 Even our Egyptian pop culture centers around completely irrelevant celebrities. Take for example, Ahmed El Tabei, who was also featured on Ramez Galal’s prank show this Ramadan. The guy’s ‘famous’ for a leaked ‘sex’ call. That’s all he’s ‘famous’ for. Of course, he hasn’t had the luck of his international counterparts- After all, he does lack Kim’s derriere and Paris’ golden locks.

On an ending note, I find the current state of pop culture quite depressing; most of those gifted fall to the absolute end of the line, whereas those with barely any talents skip to the absolute front of it. Underground artists remain hundreds of times better than mainstream figures; long gone are the days when true art was actually valued. Instead, we feed off of tasteless winks at sexual content. We crave sleaziness rather tastefulness. Important world news is covered up by irrelevant celebrity news that act as a hardly well-crafted distraction. Today’s pop culture is one big, hot mess.