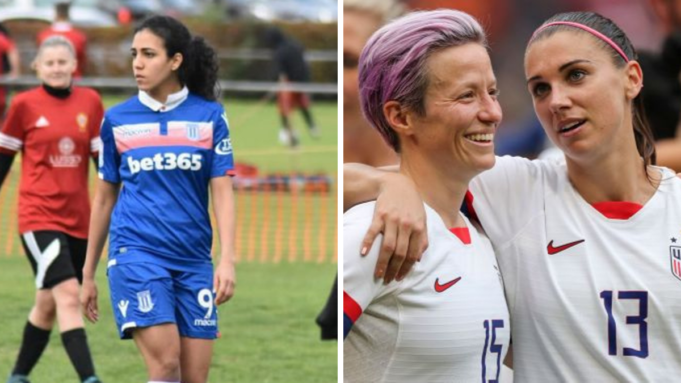 Women’s football has been turning heads in the past few years and we couldn’t be happier. While the game isn’t as popular as men’s football, it has been growing in Europe so steadily that even last year stadiums were sold out for both Barcelona and Juventus’s women’s teams.

That impact even made established teams like Real Madrid start their own women’s team.

What about Egypt, though? In the light of all this progress, what’s making us stall in following the others?

Sports in our country are a little tricky. For one thing, not all sports get the support they deserve. For a lot of Egyptians, the ‘only sport’ is football.

You’d think that means a great environment for women who play football, but it’s more complicated than that. Though the Egyptian Women’s League has been ongoing for a while now, we never hear much about it. Sporting news can sometimes act like the league doesn’t exist, only reporting on it from time to time.

Although it plays a big part, the lack of media coverage isn’t the only problem with women’s football in Egypt. People’s perception, for one thing, is a whole other story.

As the title of this article suggests, Egyptians —not all, but generally enough to create a problem— aren’t embracing women’s football, which isn’t that much of a shock. There are plenty of reasons that explain this lack of enthusiasm, so let’s explore them.

The first and most popular reason is that football is still perceived as a man’s game, so it’s falsely believed that only men should be allowed to play. Though other countries have made strides in the acceptance of women in football, we’re still at the starting line, so to speak.

Founder of Empower Academy, Farida Salem thinks there is another obvious reason. “Compared to others, it’s a relatively new sport so people think it’s strange.”

Another reason that isn’t as obvious is the fact that, well, not everyone knows this is an option.

“We can all actually help women’s football simply by encouraging little girls to play,” Farida continues. “Some might never have the idea cross their mind until you bring it up.”

Though arguments against football for girls seem silly and unfounded, other factual problems with women’s football remain.

The game needs to be restructured so it can develop as organically as other sports do.

Farida sums it up, “We need better facilities and resources and information. We need better coaches and care. All we want is for our complaints to be heard.”

This restructuring of the system would be much helped by an increase in coverage. See, most people won’t get a chance to embrace women’s football if they don’t even see it.

You might say that an increased coverage will bring us nothing but we’d like to argue about that.

Previously media-transparent sports like Squash have had an increased following in Egypt after they got their increased media presence.

Granted that came after our Squash players started winning titles but that doesn’t mean we should only give it and sports like women’s football its due attention only then.

Being an already developed sport or one in need of a proper infrastructure shouldn’t have anything to do with the actual support and care we owe our female footballers.

Who knows? Maybe an increased coverage for women’s football could instigate change in its infrastructure.

See, when it comes to sports in general, no one can deny women their place or they prowess. Women have proven themselves in sports like weightlifting, free diving, and others.

Football shouldn’t be any different because, like any other sport, it’s everyone’s game. It shouldn’t be a no-girls-allowed clubhouse, even if some believe it should be.

Stigmas are meant to be broken, especially when they don’t make sense like this one doesn’t. Having problems like everyone else shouldn’t be an excuse for stigma. It should actually be accepted as an incentive to grow and develop.

“Egypt needs more attention,” Farida agrees. “We need to listen to our current footballers and we need to encourage girls more.“

For the “world’s most popular game” to be everyone’s game, everyone should actually be allowed to participate.