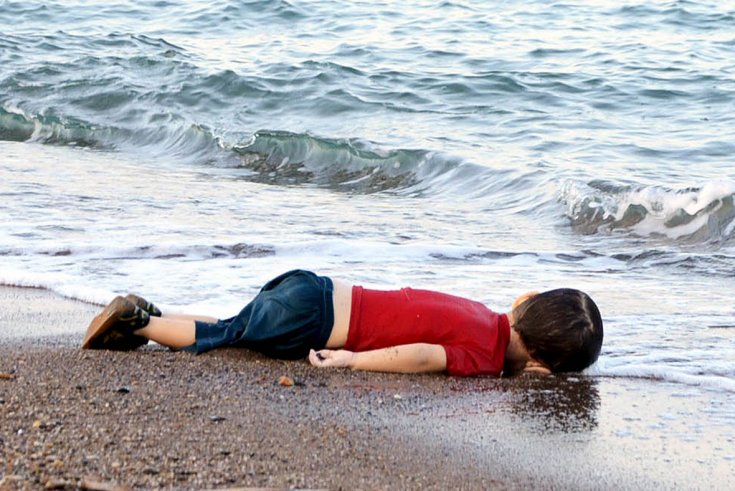 This week, Charlie Hebdo set the world of social media on fire (AGAIN). Only this time, the spell might rebound and the fire might as well catch, burning Charlie Hebdo itself.

Earlier this week, the French satirical magazine published a cartoon of the drowned three-year-old refugee (Alan Kurdi), suggesting this toddler would have grown to be a sexual predator, referring to the not long past sexual attack in Cologne, Germany.

“What would little Alan have grown up to be?” ran the caption. Pictorial by an image of two men, their faces part-monkey part-pig, arms outstretched chasing two women, the answer came underneath: “Alan would have become “a groper in Germany”.

I guess you can all imagine the social media users’ reaction to that cartoon, flooding Charlie Hebdo with how “Racist”, “disgusting” and “insensitive” they are to crack a joke out of this heartbreaking photo. I couldn’t agree more but….

Why don’t we just pause for a moment and analyze this cartoon from another perspective? The thing about satire is that everyone can perceive it differently. Most of us assumed that the cartoon was aiming its weapon at refugees; few were the ones who presume that the blow might be in fact targeting the European public.

The European public and press had a hand over their heart and tears all over their faces while seeing the photo of Alan’s drowned body last August, then their knives were out again while hearing news of the Cologne criminals this January. The Syrian refugees were one minute all angels (Guiltless survivors), then all devils the next moment (Sexual predator and a threat to Europe).

Who is the joke now?

It’s a huge criticism of Western hypocrisy. This is the vision of Charlie Hebdo, writing something shocking to denounce a situation, and making you realize what is really wrong.

However, let’s say that’s what the artist intended, still the end doesn’t justify the means. What this cartoon artist did was trying to put out fire with gasoline and his cartoon backfired on the magazine. The magazine’s team has argued that it merely satirizes Islamophobes and those who hate immigrants, but that won’t change the cruelty of using that particular picture this way.

I don’t agree that Charlie is suspicious of Islam in particular, because it’s suspicious of all religions and authority figures. You would be stunned at the number of times they insulted Christian and Jewish sacred figures; go and have a look at their profile picture on twitter! You might understand what I mean.

That’s the freedom of speech, an absolute and indivisible right. We all wrongly imagine it only concerns attacking the government and the public figures, but that’s entirely not true. This freedom can go past our wildest nightmares, and insult whatever and whomever we consider dear, holy or sacred.

Before you start the “your freedom stops where another’s begins” on me, I will tell you what’s the easiest exist they can hit you back with: “don’t read our magazine; that way we won’t cross you freedom.”

I am not against them because then I will only be contradicting myself. How come I advocate for freedom but agree to see newspapers or magazines cuffed? How can I condemn being judgmental and start judging what they publish? I am completely against the attack that occurred last year, but at the same time I am not with them.

I can’t agree to see religions being made fun of to a higher level than sensibilities can go, or see everything I cherish illustrated in a provoking cartoon.

I can’t stop their writing or their posted cartoons, but I will follow their advise and won’t read the magazine anymore.