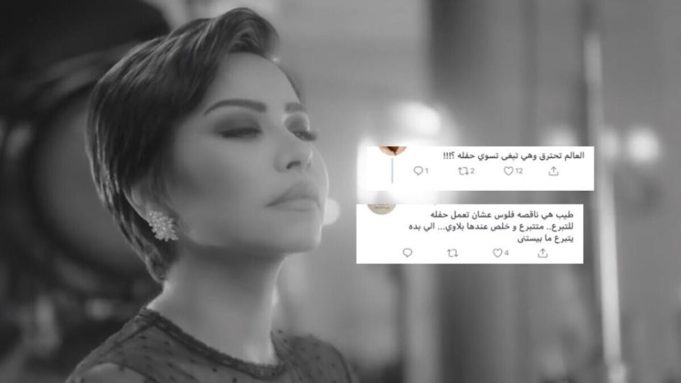 Seems controversy will always surround Sherine Abdel Wahab. It wasn’t so long ago when the singer made a sarcastic “anti-patriotic” comment on stage, the thing that almost cost her her musical career.

Since then Sherine has basically been walking on thin ice; that’s until yesterday, when the singer caused a lot of heat again on social media. This time though..we think not for valid reasons!

Wonder what happened? It only took this completely harmless tweet to unleash the fury of the masses at the 39 year old Egyptian star, again!

In the tweet, Sherine was addressing the recent fire tragedies in Lebanon. Expressing how she is devastated by the news and how she’d like to take the initiative and raise funds by performing a concert there.

Unlike what you’d expect, Sherine wasn’t called out for her brave and considerate statement. On the contrary, she was actually heavily attacked for it.

The thing that made her post a video on her Instagram, explaining how all the negative comments she received left her feeling overwhelmed to the extent of deciding to delete all her social media accounts for the time being.

So, what argument do those attackers have? You might wonder. Or at least we know we did. Apparently, her tweet was provocative for multiple reasons.

The most hateful comments were based on the argument that thinking of throwing a party in such difficult times seems selfish and silly. They “shamed” the singer for not just donating the money, instead.

Well, for a moment there, their argument seems about right. But if you give it another thought, you’ll realize how it would be of more significance if Sherine used her status as an artist to raise funds from various venues.

She did refer to the fact that all the money would be donated to those who suffered from the tragedy. The more the merrier, right?

While many attacked her over moral grounds, others did it for political reasons. Asking her why such generous offers weren’t extended to other countries in need like neighboring Syria?

Needless to say, we don’t like public figures turning a blind eye to serious social and political files either.

However, with Syria being basically a war zone, it seems absurd to ask a singer to offer help while nations, politicians and pretty much the whole world watches in silence!

With that being said, it is incidents like this one that always leave a question in mind. Why is it that we tend to see the worst in people?

Why is it that we, as an Arab nation, are always on the celebrities’ cases, even when they mean well?