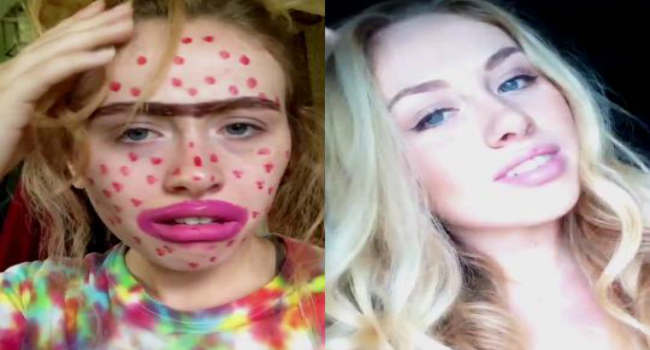 By this point, we’re 100 percent sure that the internet is a dark and scary place filled with truly disturbing things. “Challenges” are all the mania and every other week one of them goes viral and everyone jumps on the bandwagon, overusing meaningless hashtags and filming retarded videos. The latest ‘challenge’ is the #DontJudgeChallenge and it is, we regret to inform you, the most ridiculous one yet.

Well, it sounds like a challenge that advocates acceptance and diversity, but hold up, its name is actually very misleading. The challenge basically revolves around people making themselves look purposefully ‘ugly’ (even though I despise that word) and then covering the screen with their hands to reveal their ‘real’, more ‘polished’ appearance while smugly posing and pouting at the camera.

Basically, the challenge gives people the right to judge which attributes are unattractive and which aren’t. It gives them some kind of right to make fun of certain features, the likes of pimples and freckles, ridiculing skin conditions that many people actually have. Moreover, it gives otherwise bored people with nothing better to do with their lives the opportunity to flaunt their looks, which I will very blatantly say are not talents or achievements but rather God-given privileges, in a very smug and rather irritating manner.

All the challenge, thus, does is contradict itself, as it delivers a message that is anything but on par with its supposed theme. To be completely frank, we are so sick of vanity and the growing space people are being given day after day to be completely superficial and shallow. We are so done being impressed by people’s looks and money-bought luxuries. We will no longer just let attempts at body shaming others  smoothly pass by under our noses.

On ending note, we’d simply like to remind people to not just go with the flow and join in on any viral hashtag they come across. Really think before you use any hashtag, follow any trend, share or repost any posts and post any pictures or videos on the internet. Be informed, rather than ignorant users of the internet.