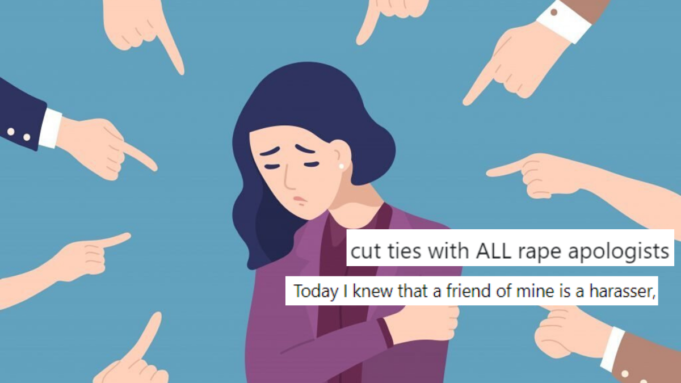 Everything’s been a little too tense for a while and we all know why. Ever since last week, many people who have been harassed and/or raped have spoken out about their experiences and are now demanding justice.

There’s no other word to describe this, really, other than powerful simply because it is. Not only has this movement shed a light on several stories, but it’s also sparked a nation-wide conversation we hope doesn’t fizzle out into nothingness.

But here’s the thing. In the midst of all this, we still have people who come out and doubt the victims and the survivors. We still have those who say “well, she has to have done something” or “but I know this person and they wouldn’t do this“.

When you hear something like that, your heart just drops and that’s understandable. And if it’s coming out of a person you know, it’s all the more devastating. Your trust has been betrayed — it cannot be described another way.

Before you try to find excuses for this person, let us say something. Rape is wrong, it just is. And so is harassment. There’s literally no way around it; there’s no way you can misunderstand it into something else.

Another thing is, we live in the age of internet and this person you know has had an endless list of resources and websites and a whole lot of people talking on Twitter to change their minds and they didn’t.

And there’s a good chance you’ve tried to talk to them too but what you said just didn’t stick and they’re still rape apologists, they still excuse these horrendous behaviors.

So what should you do now? Well, it’s simple. Cut them off.

Before you say it, yes, we know. It sounds extreme, right? These apologists could be close friends you’ve instantly clicked with. They could be that one cousin you actually have on your close friends list on Instagram. They could even be someone you’re dating.

And it doesn’t matter. Cut them off. No kind of relationship is ever going to erase the fact that their mentality about this topic is horrifying and is literally adding to society’s poison.

And if you still think we’re just being a tad too extreme, let us tell you just what you’ll be doing when you knowingly keep a rape apologist in your life.

See, when you keep your ties with people who go out of their way to create excuses for the rapist and/or harasser and nitpick the victims to endless bounds, what you’re doing is you’re invalidating the victim.

All those people who just came forward? The ones whom you felt horrified and sad for and wanted to do your best to help them and spread awareness? Yeah. You’re basically saying there’s a possibility that they’ve done something wrong when you stay friends with those who say the same thing.

Even if that’s not your intention, because it’s definitely not, you’ll be indirectly doing that. You’ll be green-lighting a cesspool of victim-blaming tactics because you didn’t take a stand against people you personally know.

Cutting off ties with someone who hasn’t personally wronged you may seem extreme, but if you think about it, they’ve already harmed you.

They let you think you could trust them but if something had happened to you, there’s a chance they wouldn’t have even taken your side. Don’t let this surprise you because it can’t. They’ve already sided with the rapist multiple times, haven’t they?

It’s hard but you have to do it.