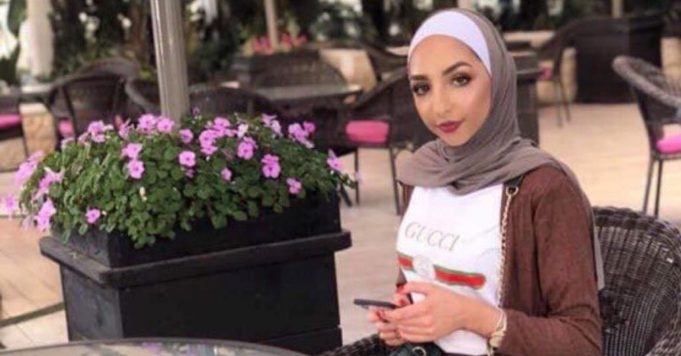 The story of Israa Gharyb, the 21 year old Palestinian who was murdered in cold blood by her family members, continues to provoke anger in the Arab world.

Over the past two days, social media went flooding with the hashtag #كلنا_اسراء_غريب
Everyone knows this is the case of a young lady who was killed over a family dispute. But not everyone knows the details behind the devastating news.

Shows to tell you even if we are in 2019 girls still have no fucking rights! #اسراء_غريب pic.twitter.com/Nid56KR0ti

Here is a Proof of ignorant & small minded individuals. #اسراء_غريب an innocent soul that was a victim of unnecessary violence.
Justice needs to take place & criminals should be PUNISHED.
IM DISGUSTED. pic.twitter.com/Zu2DVHWwo7

In case you missed the story behind the tragedy, here’s a quick recap..

Israa Gharyb is an aspiring girl from Bethlehem, who works as a makeup artist to support her family. Recently, she got engaged to a family friend, with whom she and her younger sister went out on a date. During the get together, Israa, just like any other girl, posted pictures and videos from that day on her Instagram account. Little did she know, she was going to get killed for it.

Upon seeing the pictures, a female cousin of hers called her brothers and reported to them about the whole thing and highly scolded them for allowing such meeting without Israa getting officially “betrothed” to the guy.

The thing that made her father and brother beat her so hard, they fractured her spine and caused her severe bruises she had to be hospitalized. You think they would leave it at that, no, another brother went on beating her at the hospital and after hours of her release, she returned back dead!

(There’s actually a video of Israa screaming for help inside the hospital, but we choose not to include it in respect to her memory.)

Palestinian authorities are now carrying investigations and performing an autopsy to determine the exact cause of the death.

To make matters worse, one of the relatives made a video denying all allegations of murder on their part and looking down on people attacking the family and claiming that the video of the torture in the hospital was because they were attempting an “exorcism”, as they thought she was possessed.

He is asking everyone to respect that Israa’s life or death is something for the family to decide!!

Naturally, people all over social media are heavily condemning the family for such a brutal act and are wondering why no one was arrested until this very moment.

It turns out, one of the brothers, suspected to be the murderer, has fled to Canada in fear of conviction.

Of course, that’s not the real question here. It is quite obvious Israa is a clear case of “Honor Killing”

So, how much more blood will be shed under this outrageous cultural concept?

Israa’s case is the last in a long list of murders committed by “families” protecting their honor. Is there a chance this phenomenon could ever end?

As long as this kind of mentality remains, women and young girls are far from safe. We might have been too busy fighting external entities like (rapists, molesters..etc), we forgot there’s actually a battle to fight from within.

Unfortunately, the Arab society seems to be stuck in time. There shouldn’t be a legal or social justification for killing. Some pressure for better justice is in order.

We need this epidemic to stop. But first, we need to point our fingers at the right people and at the rotten beliefs. At the end of the day, this is all because toxic masculinity is trying to control women, out of fear!

The myth of “honor” is just a tool in the hands of men to reinforce more power and control over women’s bodies and thoughts.

Hence, we, from our place, are calling for the immediate arrest of the brother. In addition, to the whole family members who had a hand in the murder.

We would also like to join forces with the thousands of users and activists calling for some serious social, political and religious reforms. That, if executed right, could save the lives of many Palestinian and Arab women.

We have been hoping that such brutality in the Arab world has come to an end. But apparently, some things and some people will never change.

Family violence under any excuse in not okay. Families who cling to the outdated habits need to be educated. Israa’s case is clear proof that there isn’t enough awareness regarding the matter.

Pure hatred and discrimination against women continues to be an issue today. Israa was killed and tortured before dying because of it. However, she is not the first girl with Arab origin to be killed for similar reasons. Nor will she be the last if things continue down this path.

We’re pretty sure there are laws on the ground banning honor killing. It just seems like this is not enough. We need to change people’s mentalities first.