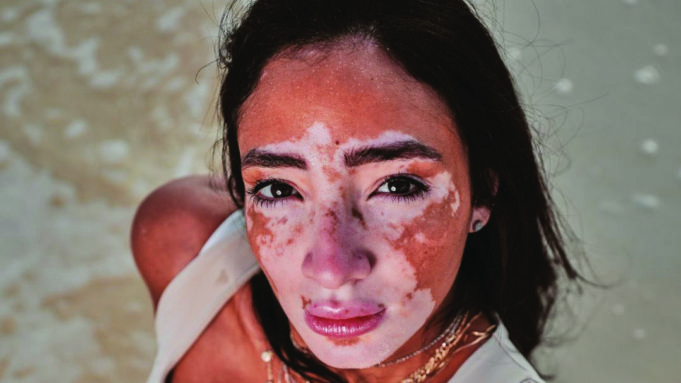 Beauty seldom, if ever, has one specific appearance. It’s an everchanging ideal, something that we can now clearly witness through the many body positivity campaigns that are trying to change the country’s age old perceptions.  Beauty no longer means skinny or light-skinned—beauty has many shapes and forms and one of them is embodied through Logina Salah.

You might be familiar with Logina Salah through Facebook and other social media and news outlets because she recently broke barriers after being assigned as an Abu Dhabi TV news reporter.

Before we can get to that happy ending, though, let’s go back in time just a little bit. Logina grew up as a fairly normal girl from Alexandria, whose day centered around school and sports practices at the club until one fateful day.

At eight years old, Logina contracted psoriasis, an autoimmune disease that meant her immune system was now attacking  mal and healthy cells and tissues alike. After the rash that came with Logina’s psoriasis faded, her skin was left decorated with white spots that kept spreading everywhere, eventually signaling the vitiligo Logina now knows all too well.

Because of the times, it’s safe to say that kids weren’t the most aware or kind to Logina during school, where she was subjected to all kinds of bullying incidents. Some children and their parents wouldn’t even interact with her, fearing that her condition might be contagious.

Because of her skin condition and the bullying that followed, Logina lost a good chunk of her self-confidence and turned to makeup in an effort to hide her vitiligo and blend in. And this is where the story gets interesting.

If anything makes it clear that through the toughest times, there will always be a silver lining, it’s Logina’s story with makeup. True, she did turn to it as a way of hiding and blending in but as she learned more about makeup techniques and self-expression, Logina learned more about accepting herself.

Her interests in beauty and makeup grew, naturally, making Logina turn down jobs in finance and banking—her college major—and travel to New York to attend Beverly International Beauty School Cosmetics, where she became a licensed makeup artist and kicked off her journey into the professional makeup world.

Logina’s career started smoothly, all except for one setback. When working with brides, she would never let the wedding photographers take photos during the makeup session, ashamed and uncomfortable with her own skin. All until two years ago when one of Logina’s friends convinced her to embrace her appearance and let photographers do their thing, assuring her that she has a unique look.

Logina took this advice and hasn’t looked back since, and even stopped using makeup to hide her vitiligo. Two years later, with a YouTube channel, a few magazine covers, and a new job as a news reporter on Abu Dhabi TV, we can safely say that Logina doesn’t regret a thing. Currently, Logina busies her time with her career and family. She hopes to be an international public speaker and start her own makeup line in the future!