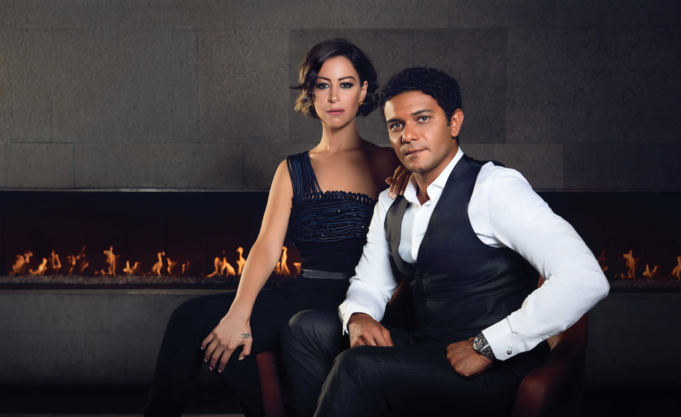 Who is good and who is evil? Who determines what’s right and what’s wrong? What’s a truth and what’s a lie? It is all subjective, and will always remain the main conflict of life which is exactly what Torab El Mas is all about.

In a story packed to the brim with mysterious events, complex characters, vicious choices, you will find yourself questioning your definition of morality and immorality.

Torab El Mas is a dramatic, passionate and dark tale of power that has taken the film industry by storm.Based on the novel by the   talented Ahmed Mourad; Torab El Mas is brought to the big screen by the skilled director Marwan Hamed, and played by an exquisite cast. 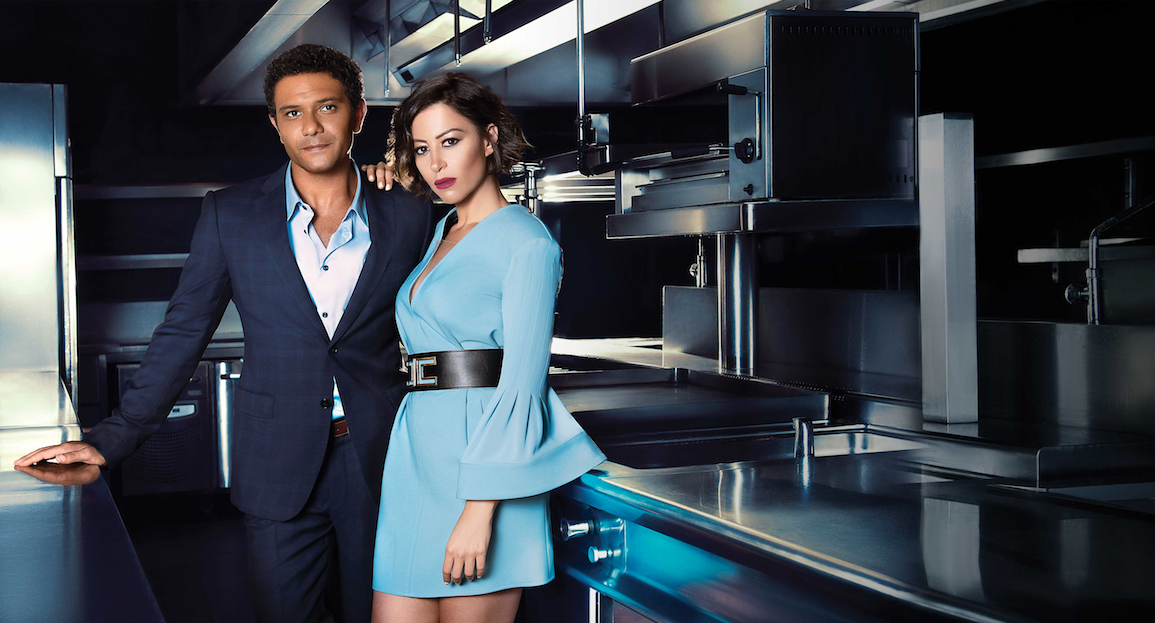 Who better to delve into the world of Torab El Mas with, than its two equally talented and astounding lead actors, Asser Yassin and Menna Shalaby?

It’s is not the first time for this duo to collaborate in a movie together; where they starred in the romcom Bibo & Beshir, and the chemistry between the two stars on screen couldn’t be missed. Their chemistry made it their interaction throughout the film look effortless. During our interview with the stars, we learned that their work experience was as effortless as it translates on the big screen.

“She is a very professional actress, and I truly enjoy working with Menna,” said Asser. “I would love to work with her again, and I think she is one of the best out there –  if not the best to be honest.”

The feeling was mutual from Menna as well, where she expressed her admiration of Asser. “What I love about Asser is how he changes from one role to another. He is very diversified in his choices of roles; that’s one of the things we have in common that made us click together and which made Torab El Mas an even more enjoyable experience.”

For anyone who hasn’t had the pleasure of watching the movie or reading the novel, the story follows Taha, played by Asser Yassin, who is a simple guy, leading a simple –close to boring – life. This boring life of his took a wild turn when his father’s diaries, along with a wicked weapon known as “diamond dust” fell into Taha’s hands. Through Taha’s battle against corruption, you will wonder whether evil is an unavoidable route to good, and how much violence is necessary in this fight.

“It’s a very multilayered character, and it has a lot of depth,” Asser indicated. “My approach to the character, if we are talking animalism; is someone who thinks he is a rat, but in reality he is a falcon. Once his life was threatened, he turned into a killer. When he realized he was living in a jungle world, all the weakness he thought he had, turned out to be anger, and despite his peaceful nature, he had to set the beast inside him free.”

Taha is a foil to the traditional hero archetype, but that doesn’t go against the fact that character is extremely captivating and interesting, so it would only make sense that such character falls for another interesting and distinctive character such as Sarah.

Sarah, played by Menna Shalaby, is Taha’s neighbor who is a journalist, blogger and protester;  a character that makes an impact with viewers as soon as she appears. “Sarah doesn’t fall into the typical Egyptian girl’s category” explained Menna. “She doesn’t let society dictate her life; she has a mind of her own. I found her a very challenging and complex character; which intrigued me even more to play her.”

Despite the worldwide belief that novels are always better than their adapted movies, the reviews of the movie are quite positive and favorable so far.

“Novels and movies are completely different mediums – like sculpting and painting, you can appreciate both, even if they have the same theme, or title.” Asser added. “Yes, sometime the novel can have more success than its adapted movie, sometime it’s the other way around. Sometimes both can be great, as well. I hope our case is the latter, especially since Ahmed Mourad wrote both the novel and the script, keeping both the novel and the movie with the same vision.”

The vision was, however, completed with the input of director Marwan Hamed. “In order for a dark political crime novel, such as Torab El Mas, to get translated into the big screen, you will need the skillful eyes of an expert such as Marawan Hamed.” Menna added; which was the validation we wanted to hear all about the two stars’ experiences working under the brilliant, Hamed. 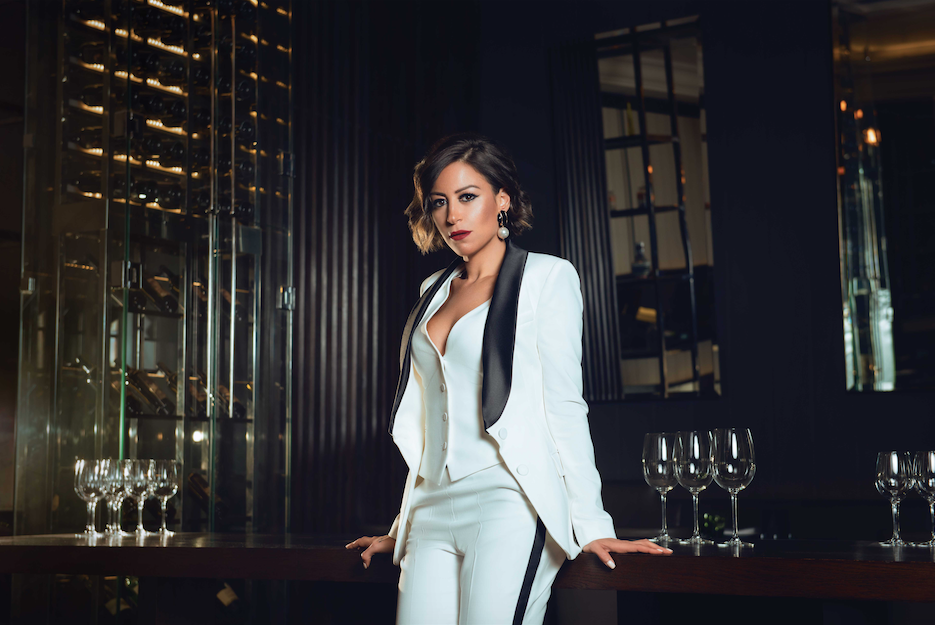 “Working with Marwan is such a joy.” Menna, who had worked with Hamed before in El Asleyin, told us. “Witnessing his unequalled love and dedication toward his work and his movies is a marvelous experience. His vision is extraordinary, and in my opinion he is one of the best directors in the Middle East.”

“He is a real professional film maker.” Asser added. “What he creates is solely for the film, no deviation, it’s not to appeal for audience, but for the film. With him, I know we are doing it right.” The first time Asser worked with Hamed was in the beginnings of Asser’s journey, in Omaret Yacoubian, so we were eager to know what this director developed in Asser as an actor.

“Attitude reflects leadership, and he is the leader of the film. Yes, I have the leading role, but the director is the one who is orchestrating everything. When he orchestrates everything perfectly, I have to be perfect as well” said Asser.

“ I had to loose weight or to learn drums for two years in order to portray Taha’s character perfectly, because I was keen to truly be this character. I was keen because I know the director was. We all compliment each other’s effort. He is the heart of the film, so to me working with Marawan is a great experience and of course I would love to repeat it.”

By just watching the trailer, you can tell Asser went through some major physical transformation. As the audience, we always see the transformation go from point A to B, without really thinking of what the actors go through, and what happens in between.

Lucky for us, we got to ask Asser, who lost an enormous amount of weight and muscles for the role of Taha; asking if it was really worth the pain and effort?

“Definitely its very exhausting!” he admitted. “When you’re planning for a role, you’re living as well; you have a family, friends, and a social life to take care of. The price of focusing on a role must affect some other aspects of your life. It’s a trip only those close to you get to witness, yet the audiences get to see the end result.  Thankfully, the majority of my movies aren’t seasonal films, but ones that will stand the test of time. They have a good foundation, and they are there for life.  Having my blood, sweat, and tears documented in a movie, for me, is appreciated and makes it definitely worth it.”

We couldn’t let the two stars go without getting a bit darker with them, and ask them what would they do if they possessed Torab El Mas. While Menna confessed that she would burn it right away, stating that she hates no one, and that such a weapon would only bring troubles, Asser had an even darker, question to ask us. 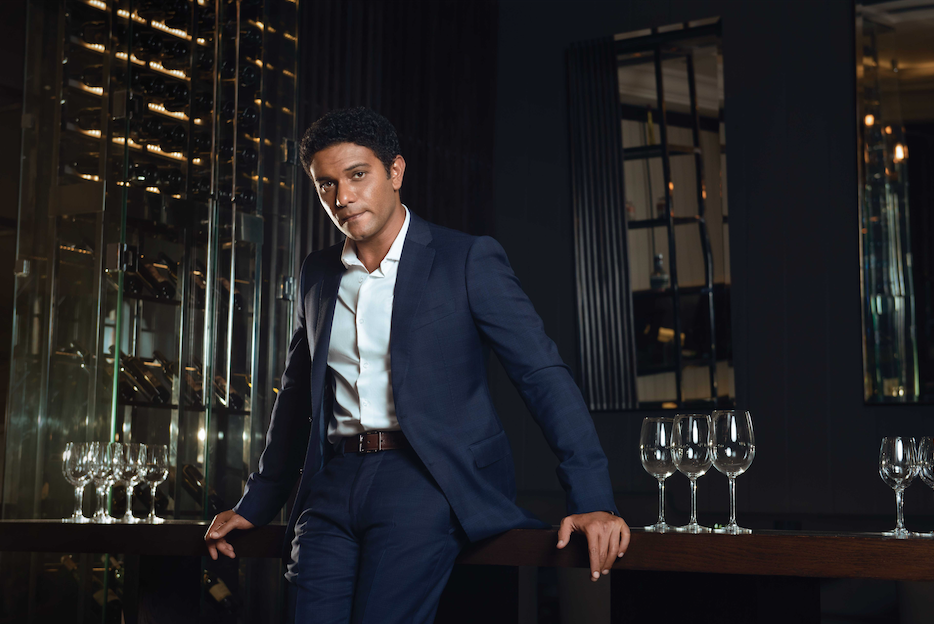 “What would you do if you live with someone, and you both know that there is this bottle there, and each one of you had used it on other people, but not on each others? That’s the scary question.”

Chatting with the two stars was definitely exciting and awe-inspiring, we wish them both the best on luck for their next projects, and we wish for more great movies to come.

“I enjoyed playing Sarah. She is a very challenging and complex character. She doesn’t let society dictate her life.” Men Shalaby

“My character in the movie is very multilayered, and has a lot of depth. He is someone who thinks he is a rat, but in reality he is a falcon! I loved playing this role.” Asser Yassin