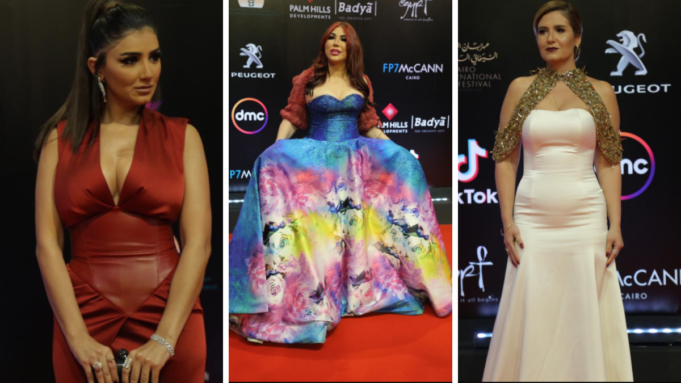 We feel like 60% of the end result was a bad fitting because, well, the dress doesn’t fit Mai right. Yes, the other 40% is probably the two fabrics clashing together in an unflattering way.

This is one of the rare times where a photo does say a thousand words very accurately. Of those one thousand words, though, we bet 900 of yours were just like ours. Why.

Another case of a bad fitting probably, Mai Korayem could have done better but there’s still enough time to learn. There will be other appearances with dresses that fit better and color schemes that flatter rather than fall flat.

While pearls are in season, too much of a good thing eventually goes sour and Malak Badawi conveyed that beautifully, don’t you think? We don’t have anything to say here except maybe less pearls and more fabric could have been the way to go.

Again, the photo says more than we can, so we’re just leaving this here.

This one is particularly disappointing because, fashion-wise, Rosaline El-Bay was going places. In this photo, however, she’s going to a 1940s spy-movie ball.

Yeah, this one’s honestly odd because we’re not sure if it’s intentional or an elegantly ignored clothing mishap. Either way, this turned heads for the not-so-right reasons.

Usually, these lists are about women because they tend to experiment with clothes more. Today, however, we’re including Ahmed Fahmy and we’re not scared of the possible tirade. The entire look is off and he looks suspiciously like Ahmed Abdelaziz.

These are our worst-dressed, did we match yours?