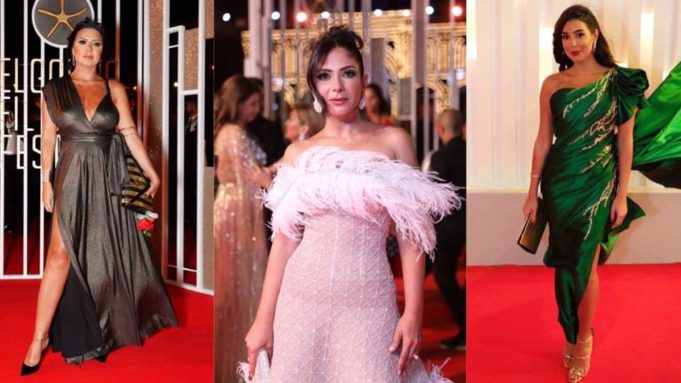 As we previously broke down what worked well on El Gouna Film Festival’s red carpet, we now give you what didn’t.

We’re sad to say that Amina Khalil was the biggest disappointment of the night. We’re not saying her dress was the ultimate worst, but it looked like a peacock inspired design that went wrong!

Another failed attempt was Ghada Adel’s. The dress looks so outdated, wrong length, wrong color and does not fit the occasion at all! It would be more convenient to wear it to a cocktail party instead.

We’re sorry, but Laila Elwi just had to land on our worst dresses list. The dress wasn’t a complete fashion disaster, however, she could have done way better.

Another “feathery” dress that landed on the bad side was Mona Zaki’s. We’re just so sad such a beauty would fall victim to poor styling choices!

We seriously don’t know what’s up with Yasmine Sabri and red carpets! She shows nothing but elegance at every other occasion though! Evidently, giving her last year’s choices as well, emerald green is just not her color.

The Lebanese sensation wasn’t at all lucky with her dress tonight. A pale color, misplaced feathers and not to mention, it made her look kind of overweight. We couldn’t help but notice a certain similarity between Nour’s dress and another actress’s, too!

Okay we get it, you’re trying to make a statement here. But let’s not push it though. There wasn’t anything special about the dress, it was only screaming “controversial!”

Although not the veteran actress’s first wardrobe malfunction, we were still surprised. We think Chahine needs to reconsider hiring a new stylist because things have been going downhill the past couple of years!