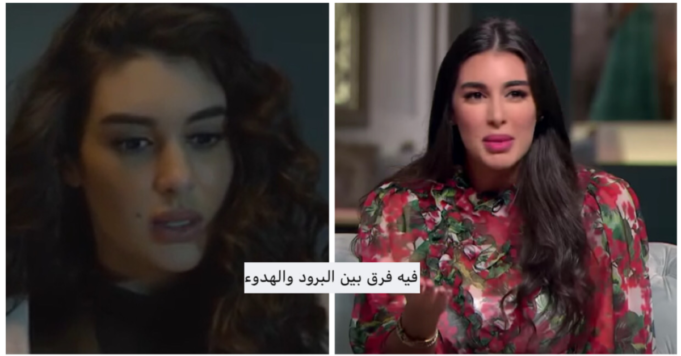 Sabri’s acting came off as super cold and unprofessional. As many of the audience pointed out the lack of emotion and connection to the character.

One of the very significant scenes that people severely criticized and made memes out of back in May, was when Aly, Dalida (Sabri)’s husband in the series – who was played by actor Ahmed Salah Hosny -, suffered the loss of his grandfather.

And instead of comforting him like any wife – or anyone for that matter – would do, she just emotionlessly said “Ma3lesh“. Which was honestly, funny and surreal.

That’s, of course, in addition to her poor acting skills in general in this specific series. It’s not only about the said scene.

Sabri’s performance was expected to be intense and much more emotional. Especially that the story revolved around a helpless and ambitious girl who, after the death of her mother, ran away from her family who vowed to murder her, only to find herself under the mercy of other evil people.

However, it seemed like the actress was determined to prove her critics wrong and justify the way she portrayed her character and performed in the series.

Sabri told Younis that first of all; she felt that the character itself is a calm person who handles things differently, including tough situations. And another reason why the performance came off the way it did is because of the actress’ real life ‘calm’ nature.

As she described herself as a ‘calm and quiet‘ person who doesn’t like loud voices and wouldn’t want to watch anything on TV with actors overreacting and raising their voices.

We just think that it’s a strange justification, to be honest.

Also, if we’re going to talk about how she thinks Dalida was a calm person who should’ve reacted the way she did; well, we strongly disagree with that too. Because that’s just unrealistic!

How could the death of someone dear to you and the breakdown of your own husband – whom you supposedly love so much – be reacted to with a calm tone and some sort of a poker face?

Again, that’s in addition to the overall performance in the face of the endless unfortunate events this character faced.

We have to admit we’re a bit confused because of two things: First, the fact that Sabri actually started off her acting career on a strong note as she portrayed Sherine in “Taree2i” perfectly. And that was mainly where she got all the applause, at the time!

And second, we’re kind of confused because at the beginning of her interview with Younis, Sabri admitted that she checks trends with her name because she needs to know what the audience think, since she would never learn nor improve if she doesn’t take their opinions into consideration.

Yet, at the end of her ‘justification‘, she said that she still wouldn’t change the way she plays her characters. Because being quiet and delivering a calm performance is in her nature, no matter who she’s playing.

We don’t know about you guys, but we were a bit thrown off by Sabri’s reaction to the fair criticism she got on her role as Dalida in “Hekayti”. What about you? Do you think the justification made sense? Let us know!