Identity Magazine
Home Trending In case you didn’t know; taking pride in your own Mother is...
Facebook
Twitter
Google+ 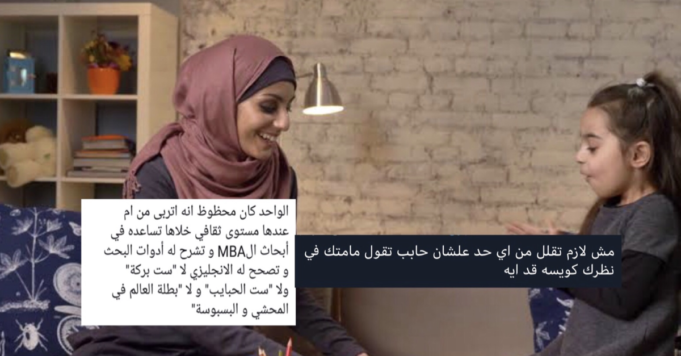 People of Twitter are currently in a major feud with a guy who has written a tweet on how proud he is of his own mother. Which is fine. You’d think why are people even mad? But when you read the rest of his words, you’ll understand.

The young man has basically shamed other mothers, in comparison to his own. He was saying how grateful he is because she was educated enough to help him with his Masters Degree.

But after expressing his gratitude, he went on to rant about the stay-at-home moms who cook for their kids. Even if he didn’t mean it like that. It sounded very shameful.

The tweet might sound like the young man was joking. However, even as a joke; this is very offensive for all the moms who work so hard to make their children comfortable at home.

And no mother would ever refrain from helping her children in their studies or work. Unless she really can’t. And let’s be a bit realistic, being in Egypt doesn’t give many women the advantage of a good education; or at least one that’s good enough to help her grown-up university children.

Even if some would see this as someone who’s just taking pride in his mother and that’s it, well, not really. Because a lot were offended, including us.

Between the jokes and really furious comments about this tweet, we can see how many felt that their mothers’ efforts are being undermined.

And that’s why we thought of making a list about the things mothers work so hard to do, but often go unnoticed:

1. Those who cook their kids’ favorite meals after a long day at work

2. Those who stay up all night because their children are studying for a final exam

3. Those who spend their whole lives doing nothing for themselves, for the sake of their children

4. Those who are the one and only support system for their sons and daughters, whenever life gets hard

5. Those who help their grown-up university boys and girls in their research and studies, IF THEY CAN

6. Those who are always there to make sure their kids are happy and don’t need anything

It’s really great if your mother is educated enough to help you with everything you do. But, never ever undermine any efforts other moms do for their kids; because it’s simply insensitive, offensive and unacceptable.

And never forget that life is never the same for everyone.