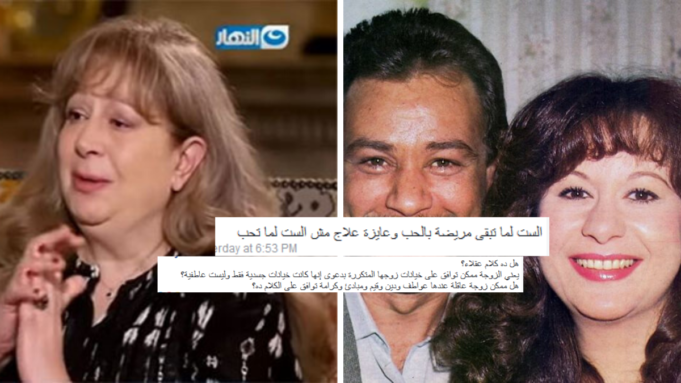 Everyone knows the age-old love story between the late Farouk El-Fishawy and Somaya El-Alfy. It was a grand adventure that eventually didn’t continue, though many held hopes for it.

No one held that hope more than Somaya El-Alfy herself, who kept it alive until her ex eventually died last July, and spoke about it again on Wahed Min El-Nas.

Would you expect someone who bared their feelings on national TV to be called out violently? Well, that’s exactly what happened. People heard what El-Alfy had to say and they weren’t impressed.

“I was fine with his cheating,” El-Alfy had said when asked about El-Fishawy’s extra-martial affairs. “As long as it was only physical and not emotional, I was fine with it.”

The actress had also mentioned feelings of inadequacy and even asking El-Fishawy about “what she was missing that led him to other women”.

Yes, we know. Somaya El-Alfy’s opinions here can be labeled as controversial at best and down right deprecating at worst. It’s even a more delicate situation, considering El-Alfy is a public figure who can actually influence people through her opinions.

There are several questions here, we know, but here is the most important one. Do we even have the right to condemn El-Alfy?

Farouk El-Fishawy has only passed away last July, we remind you, so maybe this is just Somaya’s grief talking. This cannot be Somaya’s actual mindset, right?

You can say many things about this. You can say Somaya’s always been advocating for horrible, toxic relationship patterns. Or you can say she’s a woman who’s been so affected and involved in a long-term relationship, it’s colored her entire world-view.

Personally, we go for the latter, which is why we’re not straight up condemning El-Alfy. However, we do think that she’ll need to unlearn much of what she knows about love.

Currently, a lot of comments (like the ones we’ve posted above) are swimming online about El-Alfy in the same vein of trying to get her to listen, though you wouldn’t know it based on tone alone.

A lot of what’s been said sounds cruel and plainly unforgiving, even though many commenters haven’t been in Somaya’s situation or anything remotely like it.

We’re not defending her, just to be clear. We’re only adding much-needed context because while nudging and advising a person to walk the right path is always commendable, the method matters too.

And frankly, a method like this, with harshness and ostracizing because, of course, she’s an actress and “actresses are different”, will only do more harm than good and then, who will be at fault?

Imagine if we took the time to put ourselves in the advicee’s shoes? How different would everything be?