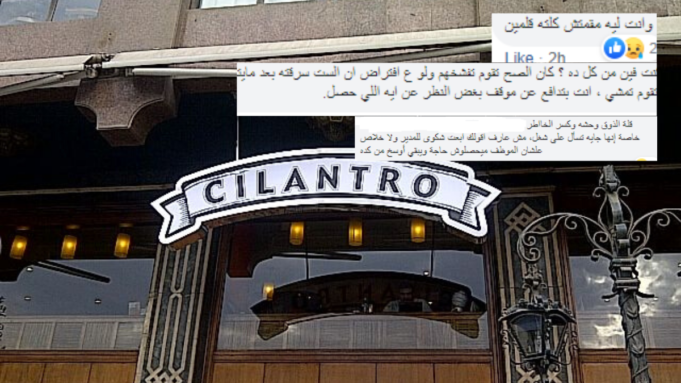 The fact that horrible things happen sometimes isn’t something any of us can deny. Sometimes, an accident or a mishap of some sort is bound to happen and all we can do is help afterwards.

What about when we don’t help, though?

What about when we see something bad and we just stand aside passively, letting it go on. Exactly what happened on the 24th of November in Cilantro Zamalek.

The story here isn’t too grand or complex. A simple woman came into Cilantro Zamalek to ask if there were any job vacancies and got treated in a way no person should ever face.

First, a waitress accused her of stealing her phone and then another waiter locked her in a closed room in an effort to make her return it. After the waitress discovered she’d misplaced her phone, no one apologized to the woman, no, they actually yelled at her and kicked her out.

Most people who have read the post cited this, but a lot of them also mentioned something very important.

Those who had witnessed this event, including the person who wrote this post, hadn’t done one thing to help the woman when she was being yelled at or locked away. This isn’t to say they hadn’t felt bad about it, no, they all did as well as felt some guilt too, for not doing anything in the first place.

This is called Bystander Syndrome, of course, in which everyone assumes someone else will act first and solve everything. However real this syndrome is, it doesn’t excuse the fact that people only snapped out of it when one random bystander yelled at the aggressive staffers.

A scenario like this only exposes the dark side of Egypt even more! You know it and you can imagine it.

This isn’t the first time people let something less than stellar happen to someone because they felt scared to speak up, especially when that person is someone who’s not in a position of clear power.

Can you imagine how horrible that woman must have felt? She went out to try to find a job and came back home after being accused of theft, locked up, and humiliated in front of everyone. All because of a misunderstanding.

If you do and even if you don’t, you should fight the urge to stay silent. Don’t be afraid of causing scenes to stand up to injustices when you can.

Yes, we know this will not solve the world’s major problems and it won’t fix everyone’s problematic tendencies, but it might help even just one person.

It might inspire others to do the same and this is exactly how change is created, by not being scared. There’s nothing scary about bravery and doing right.

Don’t wait for someone to do what needs to be done. Be the change you want to see.