Identity Magazine
Home Entertainment It: Chapter Two; Completely Terrifying But Not in The Way You Think…
Facebook
Twitter
Google+ 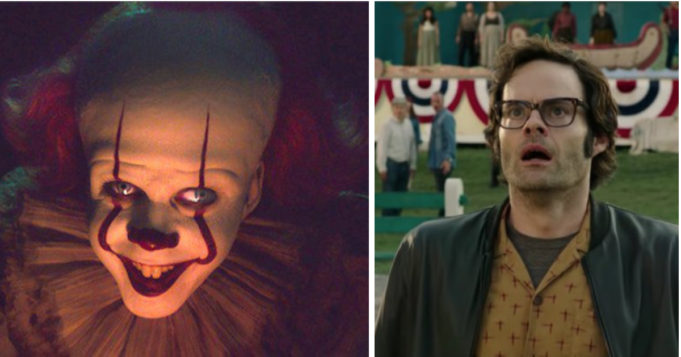 Last weekend, the long awaited horror movie of the season hit theaters. After the great success of “It: Chapter One“, many people tuned in for the second installment “It: Chapter Two” that was released this September.

We had to go and see for ourselves whether the hype around the novel-based movie was worth it or not.

Let us tell you; yes, we were terrified but not in the way you think. And here’s why:

About the First Movie:

The first movie followed “The Losers Club” – a group of 13-year old friends – who embark on a journey in order to save their group leader’s younger brother Georgie from the demon clown known as Pennywise.

Pennywise is, obviously, the villain of the story who comes out of his dark hiding place – the waterways – every 27 years to feed on children in the small town of Derry, Maine.

After learning about the inevitable death of 6-year-old Georgie, just like the rest of many children who have gone missing, “The Losers Club” are still determined to end Pennywise.

By the end of the first movie, they do send him back to where he belonged. However, they all made a vow that if he ever returns, then they all have to do the same. In order to finish what they started.

And that’s how “It: Chapter Two” starts, 27 years later. “The Losers Club” have now all grown up and moved out of the haunted town. But as Pennywise returns, they had to stick to the one promise they made.

The continuation of the novel-based movie is also directed by Muschetti. However the cast is different, for obvious reasons. Now all grown up; the film is starring Jessica Chastain, James McAvoy, Bill Hader, Isaiah Mustafa, Jay Ryan, James Ransone, Andy Bean and Bill Skarsgard.

Going back and forth between the past and the present, we first see how each person’s life turned out. And the very strong point here is that it’s almost like no one had changed.

Yes, they’ve all gone different places. Some have gotten married, others became super successful..etc. But their habits and character traits are the same. And that’s very evident and beautifully executed. Especially how we get a glimpse on how their past lives are clearly haunting them in several ways.

But, we’ll talk about that more explicitly later.

As for the plot of Chapter Two, the three-hour-movie kept moving smoothly as we see the reunion of “The Losers Club” with past love stories reignited and long lost friendships being tied back together.

And honestly, that was the best thing about the movie. Because beyond all the horror scenes and jump scares, we found ourselves more interested in every single relationship in this story.

From the moment Mike phoned each member from “The Losers Club” in order to bring them back together to the moment of their reunion and their plan to defeat the crazy demonic clown; we were on the edge of our seat.

The way the movie also kept going back and forth between the past and present, making us clearly see what had changed and what hadn’t, was great.

Especially when Mike told Bill – the leader of The Losers Club – about the secret behind Pennywise. And how they could permanently defeat him. According to the old legend; by gathering artifacts and standing in a witchlike circle in the place where he hides.

The process of actually gathering the personal artifacts of each individual of the friends’ group was fascinating. For two reasons: One, we got to see how every single one of them would handle playing with Pennywise in his own game as they try to find something to end him.

Second: The way those artifacts meant something to each character – which tied us back to some events from the first movie – was, to be honest, quite emotional.

And speaking of emotions, yes, this is a horror story that is based on one of the most horror novels of all time. However, instead of being terrified, we actually laughed and cried for the whole movie.

Why? Well, this time around the cast and crew played on how each character is trying to stay strong for himself as well as his friends. We watch as every single one of them fall into a hole of doubts, since they’re all pretty much terrified of this costing their lives.

At the same time, they don’t want to be the cowards who are leaving their friends behind to face the demon.

The plot actually thickens when we realize that it’s not about nobility.

They’re not just trying to save their town or each other from Pennywise. In fact, because they were all courageous enough to stand in front of him and scream out that they have no fears in Chapter One; they have all been touched by the deadlights that tie all of them back to Pennywise.

And those deadlights are the demonic lights that hypnotize the children/the losers club; and then kill them. They now have to gather the artifacts to trap those deadlights in the ancient vase, where Pennywise belongs.

Which is why, the chances of their survival aren’t very high even if they still leave Derry, Maine, behind.

So, yeah. The story itself had many dimensions, some of which are emotional and others that completely suck you in a world of perfect fantasy.

James McAvoy as Bill Denbrough who was played by Jaeden Martell in the first film.

Jessica Chastain as Beverly Marsh who was played by Sophia Lillis in the first film.

Bill Hader as Richie Tozier who was played by Finn Wolfhard in the first film.

Isaiah Mustafa as Mike Hanlon who was played by Chosen Jacobs in the first film.

Jay Ryan as Ben Hanscom who was played by Jeremy Ray Taylor in the first film.

James Ransone as Eddie Kaspbrak who was played by Jack Dylan Grazer in the first film.

Andy Bean as Stanley Uris who was played by Wyatt Oleff in the first film.

The cast’s choice, acting and accuracy were hands down THE BEST thing about this movie. Many people actually would disagree on whether this movie did the novel or the first one justice.

That being said, basically no one could ever disagree on the professionalism of “It: Chapter Two“‘s casting.

Every single character in this movie was so different. Each had their own personality, in both parts; young and grown ups.

And, when you watch movies, in general; you’d think that it would be harder for a child actor to imitate an old one on screen. Especially if he’s portraying the younger version of him. The accuracy ain’t always on target.

In this movie; it was the other way around. We never thought we’d get perfect and accurate portrayal of the children from part one, but guess what? Every single actor from the second part seemed to have literally studied their younger version.

People at the movie theater were absolutely fascinated by how accurate the acting was. Everything was in place; the new cast imitated the younger cast’s performance perfectly.

Attitude, speech, hand gestures, hairstyles, facial expressions..etc. You name it, they did it!

We also liked how we got to see how their present day’s selves are dealing with their lives. The movie is about fear. Pennywise feeds off children’s fear. And in the second part, we got to see how each individual character’s fear in life developed.

For Eddie, his bacteriophobia continued as well as his complex relationship with his mother that has now shifted to his wife. Bill is still dreaming of his younger brother who was a Pennywise victim.

Beverly’s abusive relationship with her father has now become the same with her husband. Richie, his loud-mouthed self and his fear of being judged for being who he is, still remains as he grew up to be a comedian.

Mike is still haunted by his family’s terrible death in the fire. And being a librarian, he was the only one who didn’t leave the town behind. Because he knew Pennywise is coming back. Which made sense.

And Ben, who had always been bullied for being an overweight child is now a successful model-like businessman. But is still being haunted by the rejection he faced especially from his love life, Beverly.

Finally, Stanley who had always feared danger. Because he knew he couldn’t face Pennywise again; he committed suicide in order to be relieved.

Also, we shouldn’t forget Pennywise. Who returned scarier and more terrifying than ever before. Not forgetting what “The Losers Club” did to him, and how he only wants revenge.

This movie’s conclusion was a little too predictable because, well; we all know how good has to conquer evil, in the end. But, here’s why we still liked it, regardless:

First of all, it was not actually a happy ending. And here’s where we told you we cried: As The Losers Club defeated Pennywise by making him sense how fearless they all were, and how small he is in their eyes; Eddie was down in the fight.

Keeping in mind that Eddie was actually one of the funniest characters and most importantly, he was Richie’s bestfriend. So, to see all the inside jokes and beautiful friendship fade away with Eddie’s death – as Richie broke our hearts crying his eyes out – was really tragic.

And it’s worth mentioning that Eddie – who showed his cowardliness at first – was actually the one who began murdering Pennywise only to die after thinking he really finished him this time.

So yeah, as we said, the ending was tragic. But most of all, very endearing and emotional.

Finally, that’s exactly why “It: Chapter Two” was completely terrifying, but not in the way you think. It was not about fearing Pennywise, it was actually about fearing lost friendships and doomed love stories. And that’s why it’s really more than a horror movie.

If you’ve already seen it and have formed an opinion about it, let us know!