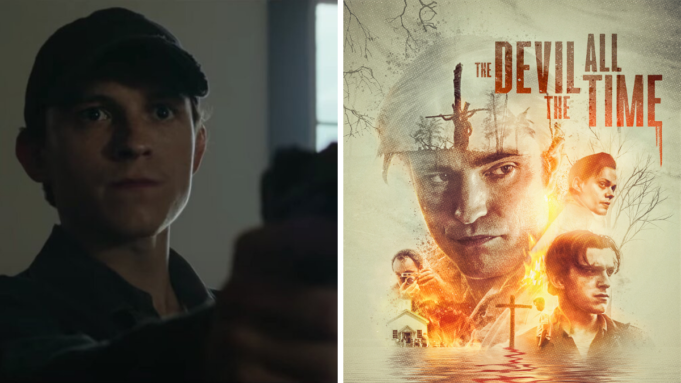 Sometimes, your mind just drifts off and you think ‘hey, this really cool idea I just had would make for a pretty great movie’. And that’s you being completely valid. For you, your daydream might make for a pretty good story. For everyone else, though, it just sucks.

Yeah. So, we’re being a little accusatory right now because, well, we think a few directors and writers need to hear this. Sometimes, your concept isn’t really all that. And, yes, we’re talking about The Devil All The Time.

Get ready. We need to talk about this.

warning: will have spoilers

Let’s get into the plot real quick. The Devil All The Time begins on a tone that’s a little bit folksy. After we’re introduced to Willard Russell and his son praying to a creepy cross in the too-quiet woods, we quickly delve into Willard’s backstory.

We see him as he was, a war marine in World War II and how that experience, seeing countless dead and more tortured, did a number on him, mentally and emotionally. We then see Willard come back home to fall in love with Charlotte to see them have Arvin.

All of this is just goes to build up to the main story, though we don’t get to that too quickly. No, first we see other characters whose stories will soon intersect. Such as Helen, who Willard’s mother wanted him to marry, who eventually marries Reverend Roy, who eventually kills her in a fit of zealous passion — leaving their daughter, Lenora, orphaned and raised by Willard’s mother Emma.

But don’t worry about Lenora being raised alone. Soon enough, she’s joined by Arvin, who’s orphaned as a boy when his mother dies from cancer and his father commits suicide (right after murdering the family dog…yikes).

And yes, this is all a precursor to the main event, wherein Arvin and Lenora grow up, with the latter getting bullied by the townspeople and eventually forming a secret relationship with the new priest, leading to her death from an accidental suicide.

And what is the main “Main Event”? Well, Arvin goes around murdering those who deserve it, from the sleazy pedophilic priest to the road-trip couple murdering hitchhikers (a side story loosely tied into the movie) to the corrupt cop in his old town. So…yeah, that’s literally it.

Talking about characterization in a movie where you don’t really get to know the characters is difficult but we’ll try our best. Let’s start with Spiderman Arvin.

Okay, so Arvin is a really complex character, whose probably traumatized. His childhood is troubled — he gets bullied, has to watch as his father assaults a few hoodlums, witnesses his mother’s cancer and passing and his father killing his dog as a “sacrifice”, as well as finding his father’s body after committing suicide. It’s a lot for a little kid.

And eventually, this little kid grows up to be a little loathing of churches (what, with his father’s woods ‘church’ and all) as well as very, very overprotective of his family, his grandparents and adopted sister Lenora.

When he starts blasting to get Lenora her justice, you’re really not that surprised. It’s when you see him going full vigilante that you’re a little taken aback, as a viewer, though you will understand the character path.

Another character we’d like to talk about? The other fleshed out character, of course. Arvin’s father, Willard, who is so traumatized by war and yet fighting everything around him. So much so, he’s actually fighting the titular Devil that Arvin succeeds in killing.

Sadly, no other characters have been fleshed out enough to discuss. We can barely get a crumb of personality from those.

Thankfully, like all mediocre movies, The Devil All The Time still has a few good things up its sleeve. For one thing, the realism factor is off the roof, which is never seen more than when we see Arvin use his gun for the first time and how clumsy he is with it.

Other than that, the movie also is one of few that really do well with interworking narration because, well, it just won’t work without it. And this is, of course, without mentioning its best tool ever — the parallels between Arvin and Willard, as they go through separate journeys wherein only one survives.

Some bad points, as in literally everything else

We’re not beating around the bush, okay. The Devil All The Time is bad. Sure, it might be someone’s cup of tea but objectively, the movie really didn’t do half of what it thought it was doing.

Let’s list a few problems now. Other than the characters we barely get to know, there’s one really, really incredibly useless character. Sheriff Bodecker, who literally serves to do nothing but become the main antagonist in the final quarter of the film. We didn’t care for him because we did not know him.

And you know what else we didn’t know? The point of this film. Like we said, it takes on a colorful folktales-y tone. But other than this longwinded (two hours and eighteen minutes, people!) movie, we could have had better storytelling and better character development if this was a mini-series, with each episode focusing on one specific character.

In the end, we’d like to give you a piece of advice. Spare your time and yourself and don’t watch this predictable movie. Unless, of course, you’re there for its original purpose…to show us that Tom Holland can act out of Spiderman and remind us that Robert Pattinson is available for roles.

It’s a true exercise in patience…just not the good kind!