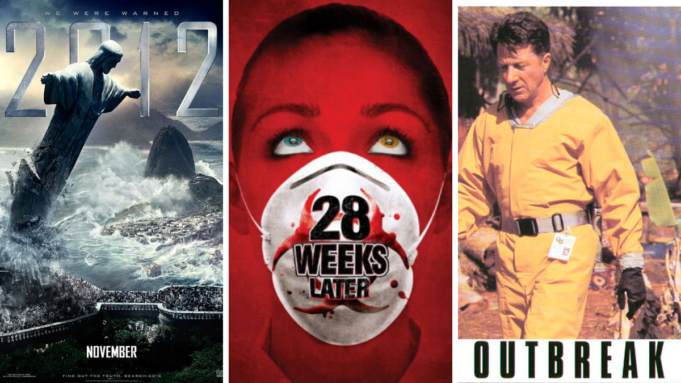 This might seem like such a random question, but have you ever noticed how many oh-my-God-the-world-is-going-to-end movies there are? As you filter them out in your head, they may not seem like a lot. Maybe a handful here or there.

If you think that, though, you’ll find that you’re off by, well, tens. See, there are countless movies about the apocalypse out there as well as many debates too about just how the world is going to end.

But just because these movies are limitless doesn’t mean they’re all watchable, which is why we decided to round up the best apocalypse movies of all time for your viewing pleasure.

The original deadly virus movie, Outbreak made waves when it was released in the mid-90’s and for good reason. It predicted the end of the world in a way that wasn’t asteroid or zombie-related, it had a young Patrick Dempsey, and it gets more ironic as it ages.

Overall, you’ll have a grand old time watching this movie, just don’t let the panic get to you. Well, try.

Curious to see what happens to humanity once the apocalypse hits and the dust settles? You’ll have to look no further than Bong Joon-ho’s (creator of 2019’s hit Parasite) Snowpiercer.

And yes, we’ll admit it. Snowpiercer is dark, gritty, and at times utterly miserable but it’s incredibly interesting to watch and will make you think about many, many things you didn’t think about before.

Ah yes, the movie that made the actual year of 2012 the most dreaded year in the 2010’s. Now, don’t think that the hype means that this movie is anything less than stellar, though. 2012 the movie is one adrenaline rush waiting to happen, so you can’t go wrong with giving it a watch.

Hey, you know how everyone is worried about climate change and global warming now? Well, have you ever thought just what the worst that could happen with climate change is, exactly?

If you did, then you’re in for an experience with The Day After Tomorrow, which gives us a very bleak, distressing overview of what would happen if we didn’t take climate change seriously. Yes, it’s concerning how we’ve been arguing about it since 2004.

A modern apocalyptic movie, Bird Box is an imagination of the apocalypse if it came in the form of creatures that brainwash you if you see them, so that’s always fun. But, hey, it’s got Sandra Bullock as a fierce mom in charge who can and will fight those creatures bare-handed for her children, so that’s a win.

Another metaphor for the horrors of modern parenting, A Quiet Place is similar to Bird Box except its apocalypse has vicious aliens who will find and murder you if you make a sound.

We follow one family around as they try to be as silent as possible while navigating childbirth and disabilities. It also has a positive message about sign language, so that’s a plus.

If you only had a few hours left before everyone’s entire existence, including yours, was wiped off the face of the earth, wouldn’t you want to throw a killer party to say goodbye?

If your answer is yes, you’ll understand why James in These Final Hours is pissed off about having to be a good person who has to get a lost girl back to her parents, on his way to party himself to death, literally.

Melancholia may seem like another apocalypse movie but there’s one little catch. The end of the world happens during the lead character’s wedding, which is exactly as horrifying as it sounds.

It gets worse as time goes on, too, as we follow the unlucky bride and her nephew trying to reunite with their family. If this movie sounds too depressing, then it’s gotten its point across since it’s also a metaphor for depression.

So, the end of the world is happening and everyone’s running mad crossing things off their bucket-lists and these two lead characters are no different. One of them is on a mission to help their friend reunite with the love of their life before it’s all too late. As romantic as it’s morbid, isn’t it?

So, now we’ve got movies about how the world is going to end because of climate change, a deadly pandemic, asteroid collision, among other things. But have you ever wondered if maybe the real apocalypse-starter will be humankind itself?

Well, that’s just what 28 Weeks Later is about, with the whole story being people going on a rampage because of a widespread Rage Virus.

Lean back into your couch, gather the family, and binge-watch to your heart’s delight!