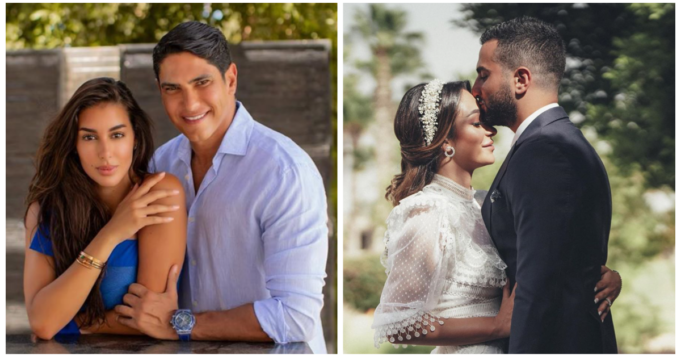 Despite the spread of the Coronavirus leading up to the social distancing campaigns, that didn’t stop a number of Egyptian celebrities from getting married and fighting the pandemic with romance.

Here are 4 celebrity couples who decided on not giving in to 2020 with all its pandemics and catastrophes:

Rumors of their engagement started around February when a diamond ring was spotted by social media users and went viral from Sabry’s Instagram stories.

Shortly after, the actress and the renowned businessman tied the knot on April 17 at their home in the presence of their families and a few close friends.

It’s noteworthy that their relationship was mostly revealed shortly after Yasmine Abd El Aziz’s brother basically bashed the couple on social media and made accusations about the nature of their relationship. That being said, let’s not forget the public exchange of romantic comments on Instagram that hinted at their not so secret love story.

It was all really confirmed when El-Awady changed his social status from ‘single’ to ‘married’ on his personal Facebook account – leading up to the official news about their marriage.

At the end of June, actor and singer Mohamed El-Sharnouby tied the knot with his one-year fiancée and professional artist manager Randa Riad at her family’s house in the presence of their relatives and friends.

It’s worth mentioning that both of them showed commitment toward social distancing and precautionary measures due to the pandemic outbreak. Safety before the happily ever after, right?

Ghada Abd El Razik and her television series’ Director of Photography Haitham Zeneita were already under the spotlight for having a secret relationship back in 2012 when they worked together in “Hekayet Haya”.

Years later, the actress got married for the 12th time in her life, this time to Zeneita. They celebrated their marriage at the shooting location of her Ramadan 2020 series “Sultanat Al Moez” and spent the honeymoon at the North Coast with their family members away from Cairo’s traffic and curfews.

There’s no doubt that these celebrities challenged the outbreak of the virus by weaving their motto “Love during the Age of Corona”. It is now confirmed that nothing will stop two love birds from getting married and living the sweet life!