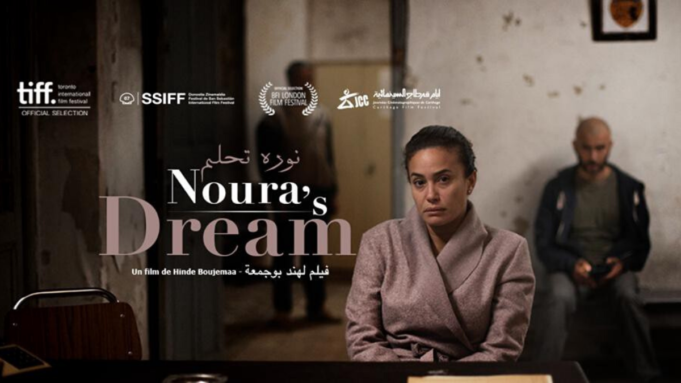 Okay, we have to admit this. When we first saw Hend Sabry winning an award for Noura’s Dream during the last GIFF, as well as getting more prestigious accolades too, we were curious. This is the first Tunisian production we’d heard Hend Sabry was doing in a while. Of course, we’d be curious.

And after the film dropped last night on online streaming sites, well, our curiosity was finally sated. We finally saw Noura’s Dream and we’re about to tell you what it was all about.

We begin the story with an easy, unassuming glimpse into the titular Noura’s life, as a dry-cleaning lady and a tired mom of three, by seeing her do something we’ve all done. Slack on the job and talk on the phone.

Except in Noura’s case, this phone call isn’t socially acceptable. See, she’s talking on the phone with Las’ad, the man she loves and a few scenes after, we see her and this man go to a governmental office to help Noura file for divorce from her jailed husband. Noura runs into a few judgmental troubles from the office lady and then returns home and the day passes.

On another day, she takes the kids to visit their father in prison and while they’re all happy, we can tell Noura isn’t and hasn’t been for a very long time.

Hearing her husband’s record and then seeing their interactions, we can tell why. Noura’s marriage is unhappy and troubled and Jamal, her husband, is an unchanged criminal she’s slowly and quietly trying to purge out of her life.

And then Jamal gets an early release from prison. And, yes, things get worse. After he’s released, we spend a portion of the story seeing Jamal as he struggles to find a place in the new life Noura was building away from him.

Jamal slowly discovers none of his things, furniture, or even bed are in the new house and that Noura has never given him a new address or even told him they were moving. This all goes without also mentioning that neither the kids, save for the youngest, Nadia, or their mother can stand him.

Meanwhile, Noura and Las’ad try to deal with their situation and their lack of backup plan by going through their options. As this happens, Jamal grows more suspicious, serial-killer-style, and the atmosphere grows more and more tense until Noura is finally caught in the dead-end she wanted to avoid and her dream becomes a nightmare.

But, do not worry, the story ends with Noura’s actual dream realized. Even if it’s not in the way you expected.

Naturally, we’re beginning with our main character, Noura. And here’s the thing about her. When we first meet Noura, though she’s smiling and though she’s relatively doing okay, we can tell she’s trapped.

She wants the best for her kids and her life but the money is tight. She’s in love and having her one true romance but she’s still married. But Noura doesn’t shy away from changing her life, or at least attempting to.

See, she’s been trying her hardest to disappear without a trace so her jailed (hopefully ex) husband wouldn’t be able to find her. Watching this at first, you’ll be a little caught off-guard because, well, why wouldn’t she just ask the man for a divorce?

And then you meet Jamal. Out of prison, Jamal attempts to be the kind, weirdly romantic man he pretends behind the glass but after his release, you can basically feel the suffocation in every shot and frame.

And this goes without mentioning that he doesn’t see his wife’s blatant disgust with him or try to ask what’s wrong or what he can do. No, Jamal goes back to criminal activity rather quickly.

He also keeps an eerily calm image until he discovers who Las’ad is and the affair the latter is having with his wife. And that’s when Jamal’s true colors emerge.

Speaking of Las’ad here, well, all we have to say is this man got the shortest end of the stick, even if we all saw it coming. When you first meet Las’ad, you’re worried for Noura and her family.

You think maybe he’s just using her or something or the other and when Jamal’s released, you truly see what he’s made of. Because Las’ad doesn’t leave Noura or even attempt to.

All he tries is to accelerate the chance of purging Jamal from their lives until he gets caught in a trap laid out for him. And even then, he sticks to his principles.

Even though we’re not accustomed to Tunisian cinema, we have to say one thing. Noura’s Dream isn’t a story that transcends reality. It’s a story that very much lives inside it.

When you watch this movie, you might be shocked and caught off-guard and horrified by some implications but you won’t be watching something bizarre. There is an undeniable uniformity about the film and about Noura herself.

Because, you see, the thing Noura dreams about is simply freedom. And this is why the story is important and why the ending, though seen as a bit sad, is even more important. Freedom has many different names.

Trust us, you’ll be happy watching this one. And you’ll get to hear Hend Sabry in her native Tunisian too.