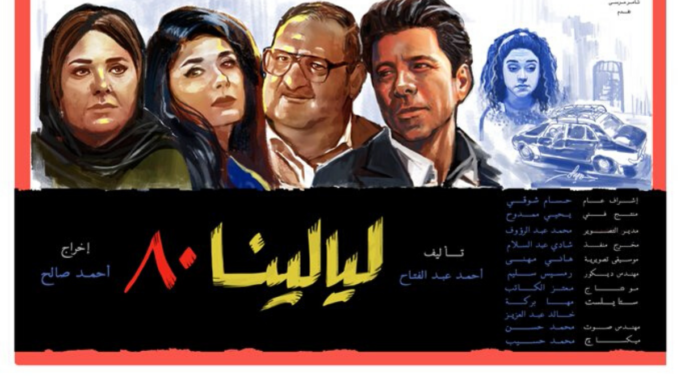 Watching Layaleena, you’ll pretty much confirm that the 80’s were an era all in their own. And with all that big glamorous hair, Mohamed Mounir albums, and a generally pleasant life outlook, it would’ve been hard for them not to be, honestly.

A large part of Layaleena’s success comes from the charm that anything 80’s casually brings to the table, but is it more than that? Is the story worth watching beyond the vintage decor?

The Story So Far

The show begins on the day Hesham (Eyad Nassar) returns home from an unnamed Gulf country, coincidentally the same day Anwar El-Sadat was assassinated, and finds no one home. Soon after, we begin to see that he’s married to Mariam (Ghada Adel) , a practical if materialistic woman, and is estranged from his brother Galal (Khaled El-Sawy).

On the other side of town, we see Nahed’s (Sabrine) story, a mother of four who struggles to make ends meet and makes sure everyone around her is okay. Characters soon collide after Hesham and Mariam’s daughter and Nahed’s son get into a devastating car accident together.

What happens after this is a stagnation in the characters’ lives as they drop everything and practically move into the hospital. And that stagnation can only mean one thing for us — we get to see how these characters interact and how they truly feel about each other.

We see that Hesham and Mariam’s marriage is suffering, Galal is suffering hallucinations of his dead wife and is estranged from literally everyone, and Nahed is suffering constantly with her kids and meddling mother.

We also see that the two families involved in the car crash are probably going to get to know one another because everyone threatened to sue.

With the bulk of the first two episodes behind us, the plot itself is still working its way to weave all characters introduced into each other’s lives, taking its time in doing so.

When it comes to the characters, boy, do we have a lot of ground to cover!

To begin, let’s lay out our main characters: Hesham, Mariam, Nahed, and Galal, each an extremely realistic example of everyday people with all their materialism and work ethics and long-suffering.

These characters are, so far, still the most fleshed out characters on the show as we see their conflicting emotions, natures, and the appearances they put in public.

But in a show like Layaleena 80, which has a wide range of supporting characters and is, undoubtedly, still introducing more, the development of its four core characters isn’t surprising but it does leave us curious.

Our Take (After 6 Episodes of Viewing)

After (almost) one week of watching Layaleena 80, we can say that we’re rather surprised. At first sight, you’re taken with the setting, decor, clothes, and all the events and places the characters reference but when you take a look at the plot, you’ll find that it takes its sweet time in moving along.

But honestly? We’re not that bothered because the alternative to Layaleena’s slow-burn is a rushed, probably-botched job at hurrying the pace and intertwining the characters together. Sure, it’s still building up while many shows have taken the green light and ran but we have to remind you, we’re only six episodes in. The plot gets more shape as we move on and that just speaks to the level of care being put into this show.

We can’t wait to see what happens next.