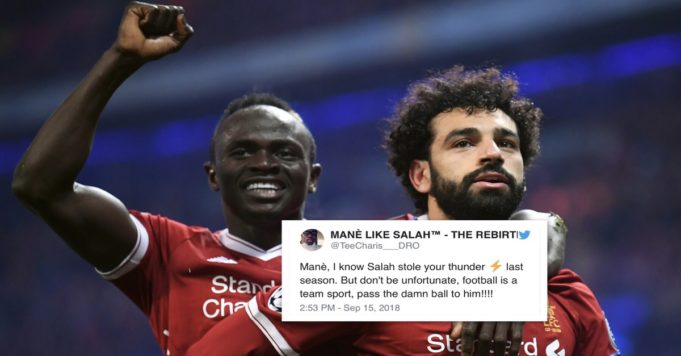 On Sunday, September 16th, it was officially reported that the market value of all the Egyptian league clubs is set at 135 million and 150 thousand Euros. While the Liverpool Forward and Egypt’s international Mohamed Salah is worth 150 Million Euros, meaning Salah’s net value has exceeded the whole of Egypt’s football teams combined with a total of 15 million Euros.

It’s worth mentioning that Salah is the fifth most expensive player in the world; following the likes of Harry Kane, Neymar Jr., Kylian Mbappe and Lionel Messi. 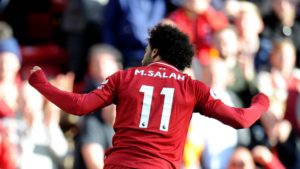 However, although the guy won a bunch of prestigious individual awards like CAF’s African Footballer of the Year, and is currently nominated for FIFA’s The Best award, not to mention how he’s dearly loved around the world; but STILL apparently, all of that wasn’t enough for Sadio Mané to pass him the ball!

Yesterday, during Liverpool’s match against Tottenham at Wembley Stadium, as part of the English Premier League fixtures, literally everyone noticed that something was clearly off between Salah and Mané.

Despite the Reds’ 2-1 win, everyone saw that the LFC forwards lacked their usual chemistry! It even looked like they did not clearly see each other on the pitch, although this wasn’t quite possible. 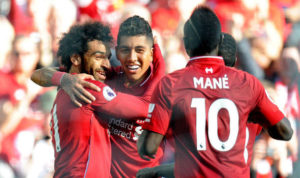 Throughout the game, it was very obvious that the Senegalese player was doing everything he can to avoid passing the ball to Salah. It evidently cost him over 4 chances of scoring, one of which was a 100% visible pass to Salah into the net. 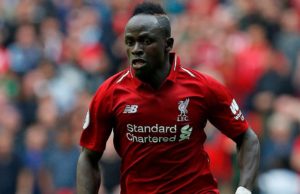 We were 2-0 up in all these situations. Our forwards either took the wrong choices or became selfish. Klopp got furious and he was right to be as we had some good chances to seal the game. Players need to focus on win more than scoring. pic.twitter.com/ljNDxcBvXT 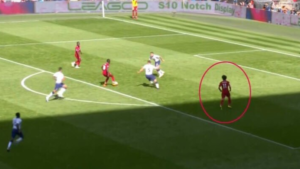 The issue sparked anger and controversy on social media. Many people reacted to what Mané did; and believe us, it was not just the usual overprotective Egyptians. Many Liverpool fans actually opened fire on Mané for his strange moves, and most of them agreed that it was not about miscalculations. It was that Mané is absolutely selfish, clearly jealous of Salah, and does not want to see him score anymore. (Maybe he wants the CAF’s award too?) 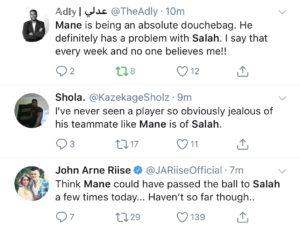 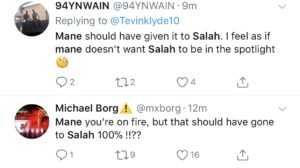 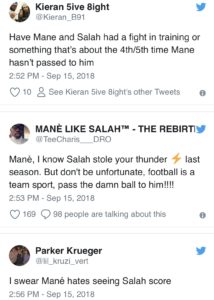 Other than expressing their anger and confusion, the phrase “Pass the damn ball to Salah” was highly tweeted. Some people, mostly Egyptians, also took to Mané’s Instagram account to send him hate comments on the picture he posted after the match, which he immediately deleted it! 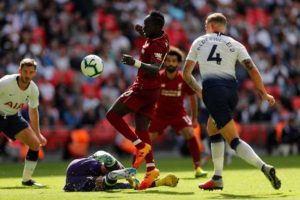 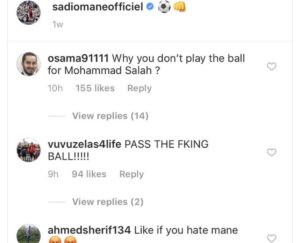 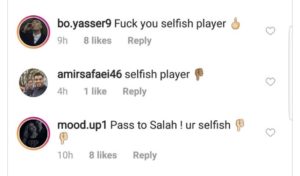 So what do you guys think about this controversy? Is Mané really jealous of our golden boy and feeling that he stole his thunder last season? Well, it’s now clear that he’s currently trying to get it back, even though it’s costing the team and making the LFC fans worried. Not cool Mané, NOT cool!

Sources: Youm7
90 Min In
Give Me Sport