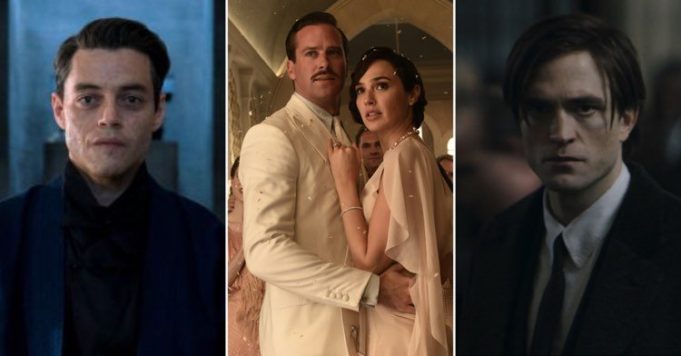 As the movies are starting to drop, good may they be or bad (looking at you Tente), we’re actually starting to get excited at the idea of spending our money at the cinema theatres again. So let’s go over the list of movies dropping in 2020 – or what’s left of it anyway!

The trailer for the latest Batman installation was released like a week ago, but we’re actually still under its effect. One word people, ROBERT PATTINSON. He’s coming full force!

No Time To Die

Honestly, this is the one movie we’re super excited about. Although the movie is a little jinxed, the postponing fiasco and all, but we’re still over the moon about it. For one, the movie is so big as it’s the last one for Daniel Craig. But more importantly, the fact that Rami Malek is the new villain!

Death On The Nile

After the huge success of Murder On The Orient Express, the runners decided to follow up with another Agatha Christie based film “Death On The Nile” and we’re thrilled. The film will star Russel Brand, Gal Gadot, and Emma Mackey and it’s set to premiere in October!

Does anyone else feel like we’ve been waiting for Mulan’s live-action remake since forever? Is it too good to be true? *talking to you Disney* Anyway, we heard it might be released this September. We’ll wait and see.

Finally, the long wait and the many delays for your favorite Amazonian warrior is over. Wonder Woman will be running next month, October 2nd. Excited to see Gal taking on new villains and knocking them dead?

So, where’s your cinema money going next?