You might have noticed in recent years that there is a growing trend of vegetarianism in Egypt. While this is meant to be better for the environment and animal welfare, a careful look reveals the hypocritical and problematic issues of a veggie diet.

For example, the veggie trend is dominated by Western food…. an erosion of Egyptian culture and heritage!

Although the food may look pretty, we’re definitely not here for a trend which makes traditional food out to be of lower status or ‘humble’ by contrast.

Why do people choose a vegetarian diet?

Traditionally some vegetarians have claimed that they do it because they love animals too much to eat them, it’s better for the environment, they simply do not like the taste of meat or they want to eat in a generally healthier way.

Despite these credible reasons, it never really caught on, even with a range of Egyptian dishes such as koshari, feteer and mahshy suitable for a vegetarian lifestyle. 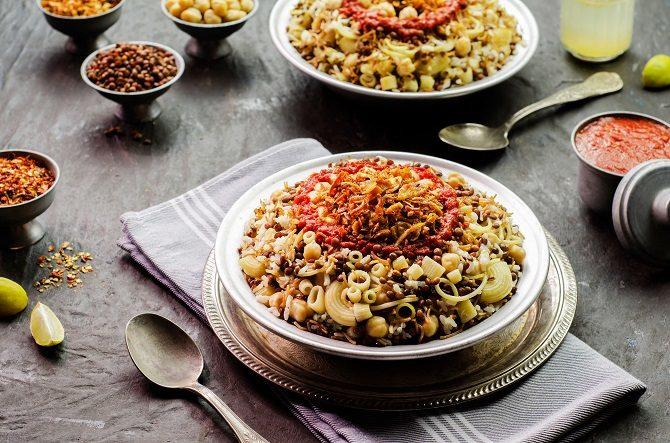 When Westernized vegetarian dishes became available in Egypt however, the number of vegetarians began to grow. Dishes like Quinoa salads and pretty looking breakfast bowls became the new ‘thing’.

How it’s all just a trend!

You only have to look through some of the 23 million Instagram posts under #vegetarian to see they are trying to be ‘hip’ and ‘trendy’.

Some are even served with conveniently placed flowers and a dusting of sugar. It’s as if we genuinely have the time, money and effort to spruce up our meals like this.

Why vegetarianism is problematic

Vegetarian food itself is not problematic. It is the Westernization and marginalization of traditional dishes which raises an issue.

On her blog ‘One Arab Vegan’, an Egyptian living abroad (Nada) posts beautiful photos of her Middle-Eastern and travel inspired vegan recipes.

Her ‘Egyptian’ Superfood Salata Baladi is bulked out to include quinoa, chickpeas and avocado. According to her, turning a ‘humble salad into a nutrient dense and filling meal’.

This choice of wording makes traditional food out to be ‘humble’ or of lower status, yet for most Egyptians it’s the food we’ve grown up eating! This kind of recipe simply degrades and devalues a traditional lifestyle.

If anything, the West could benefit from adapting to Egyptian ways of cooking and eating, NOT THE OTHER WAY ROUND.

Shopping at markets and eating what’s in season is one of the best ways to reduce your carbon footprint and help the environment. Importing Quinoa and the latest vegetarian fad is not!

While some veggie meals look like they could be really filling, it’s clear that others are just for show.

The cost of putting together all the imported ingredients is also simply unattainable for most.

Even if you can find all the ingredients, many are difficult to cook. Avocados in particular are expensive AND inconvenient – they’re hardly ever ripe when you want them to be!

How vegetarians contradict themselves…

Lots of vegetarians and ‘part-time vegetarians’ (the name given to those who sometimes eat meat) claim that their main reason for doing so is because it’s healthier, protects animals and is better for the environment – not because it’s a trend.

This is so hypocritical!

People are also more than happy to have avocado, but not avoCARDIO!

Eating vegetarian alone is not enough to bring about a healthy lifestyle. Most nutritionists recommend exercise, lots of water and the cut back of certain vegetarian foods and substances too (like chocolate, shisha, cigarettes and alcohol!).

Some veggies are more than happy to overlook their bad habits, whilst preaching about the health benefits of their diet at the same time!

Without being too harsh, we must recognize that being a full-time vegetarian can be hard. You have to be ready for jokes about you all the time, like the common attack that ‘carrots have feelings too!’.

Even if the trend has problematic Western influences, vegetarians are indeed growing in numbers in Egypt. It seems the pull of pretty pictures and bohemian-style flower infused dishes is too much for some hipsters to resist!

Lovingly written by a vegetarian of 6 years.