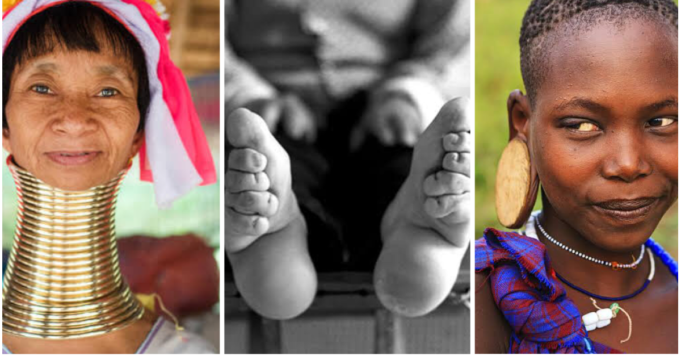 If you think heels and corsets are the worst types of social-inflected pain that women had to endure for beauty, you’re absolutely WRONG. Throughout history and before the globalization of beauty standards, every culture from around the world had their own definition of beauty. Here are 5 of the worst we could find!

This was an Asian beauty practice that is also more commonly known as “feet binding”. It started in the 10th century among members of the upper class and spread widely with time.

Why? They simply wanted women’s feet to be freakishly smaller, so they would wrap them or bind them to prevent their growth!

Many cultures adopted the neck ring beauty concept, but it’s mostly common in Africa and Asia. For a woman to have a long beautiful neck, it means wealth and good family lineage.

In some African and particularly Sundanese tribes, scarification was a legit beauty practice. They’d scar patterns on both boys’ and girls’ faces to mark (literally) the beginning of their manhood and womanhood.

Yeah this modern trend actually stems from an ancient one. In Kenyan tribes, they used to believe the more stretched your earlobe, the more beautiful you were.

Did you guys know there’s still a festival in Thailand to celebrate people with cheek piercings? This ancient tradition believed to protect one from evil spirits and bad luck?